Pressure on for IHL double-header weekend 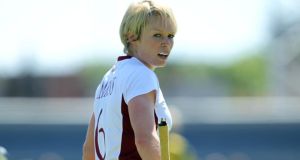 
After last Saturday’s opening round of pool matches in the Irish Hockey League, this weekend’s double-headers put the pressure on those whose campaigns began in defeat, not least defending champions Railway Union who play two opening day victors, Catholic Institute and Pegasus.

Railway will have home advantage against the Limerick side, before travelling north for Sunday’s tie with Pegasus, who began impressively with a 4-1 win over Hermes.

Hermes need to get points, and while they might be hopeful about doing so against IHL newcomers Ulster Elks on Sunday, before they play a Loreto side boosted by the return of Nikki Symmons and buoyant after their defeat of Railway. Loreto’s second tie of the weekend is against Institute who beat Elks 2-0 last week, the Ulster side missing half their regular team.

In Pool B, it’s UCD, Old Alexandra and Lurgan who are playing catch-up after losing their opening games. The first two of that trio meet at Serpentine Avenue tomorrow in a critical tie for both, before UCD take on Munster champions Cork Harlequins at Belfield on Sunday and Alexandra host Lurgan at Milltown.