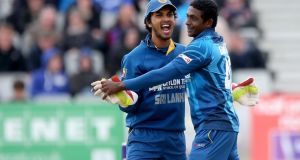 Ireland captain William Porterfield has backed his side to bounce back from a batting horror show in the second encounter against Sri Lanka at Castle Avenue today.

Porterfield top-scored in Tuesday’s 79-run defeat to the tourists, with fellow left-hander Niall O’Brien’s knock of 33 the only other score over 20 as Ireland were bowled out for 140 having restricted Sri Lanka to 219 for eight.

Ireland’s two top-scorers both fell to Ajantha Mendis, the mystery spin bowler also trapping Stuart Thompson leg-before in a 10-over spell of three for 27 that all but ended home hopes.

Mystery man Mendis
Although admitting that Mendis is a dangerous proposition on any pitch with a bit of turn, Porterfield believes his side mustn’t get bogged down when facing him.

“You can pick up different clues, he bowls pretty quickly and you can play him almost like a seamer at times,” admitted Porterfield before returning to Tuesday’s failed chase.

“For 65 overs of the game we’ve played very well. When you’re up against that class and a wicket that’s very helpful towards Mendis then I think that you have to give credit to him. It’s tough but I think we can . . . take him for 35 with a minimal loss.”

It meant Sri Lanka skipper Angelo Mathews’s bowling workload only consisted of two overs and he was fulsome in his praise of his attack.

“I was not really bothered once we got the 220 because the wicket played pretty slow in the first half and actually got better in the second half.

“Our bowlers once again, the spinners were absolutely brilliant. You know Mendis bowled some really good balls and also Sachithra Sennanayake. And also the two fast bowlers came to the party, so all in all it was a great effort.”