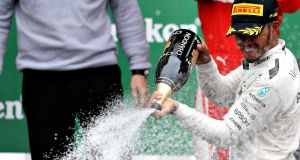 After all the conspiracy theories that Mercedes were somehow trying to scupper Lewis Hamilton’s bid for the Formula One world championship, how quickly things have changed.

A superb run to a win here in Montreal, in a tense but ultimately perfectly judged race by both the driver and his team, means he has two victories on the bounce and, having been 43 in arrears two races ago, now trails his team-mate Nico Rosberg by only nine points.

What is more, as the battle intensifies their touch at a highly contested first corner is likely to increase the tension between the pair.

The team’s strategy to stop Hamilton only once paid off handsomely, as he beat Ferrari’s Sebastian Vettel, who opted to two-stop, into second place, with the Williams of Valtteri Bottas in third. With the car under him firing as it should, the world champion has reignited the title fight. That he should do so at Canada and in such style seems apt, as he is rapidly making the circuit his home from home.

It is Hamilton’s fifth win in Montreal – the first track at which he has scored so many wins, his fourth from pole here and a victory that brings him within two of Michael Schumacher’s record of seven.

The Mercedes director of motorsport, Toto Wolff, also added how close their tyre call had been. “A one or two-stop strategy was marginal. We weren’t quite sure we would make it with the tyres until the end but we did it.”

A thrilling opening resulted in Vettel taking the lead with an extraordinary start off the line from third on the grid into the turn one left-hander. Hamilton was passed up the inside after he had bogged down. Hamilton stuck to his line, however, and touched his team-mate Rosberg, who was trying to go round the outside. With Hamilton defensive Rosberg had nowhere to go and went off wide, ultimately dropping him to 10th by lap two.

It was only the beginning of a difficult afternoon for Rosberg who found that the Mercedes that is so good in clean air, struggled in traffic, as has been the case before. He then suffered a slow puncture on lap 51 but made a very impressive recovery drive with a fine move on Kimi Raikkonen on lap 58 that ensured that he rescued as much a he could from the situation, finishing in fifth.

Ferrari, who had brought a new turbo to this race, had expected a step forward in Canada and proved that in race pace their upgrade had brought them almost on a par with Mercedes. When Vettel sprung into the lead he maintained a gap to Hamilton of around one second.

Mercedes kept Hamilton out on his ultrasoft tyres, making their option a one-stop.

Hamilton took new boots in his only stop at lap 24 with a 6.7-second gap to Vettel and returned to the track 13 seconds behind the German, knowing he had to stop again so would need an advantage of around 19 seconds to maintain the lead.

Indeed, Hamilton in fact dropped the margin with some solid laps and Vettel coming through traffic, and after Vettel made his final stop on lap 38 and was back up to speed he was 7.8 seconds behind Hamilton with 31 laps to go.

A battle to the finish was on but first Vettel had to catch Hamilton and the new rubber advantage did not quite seem to be paying off.

Within 12 laps and with 20 to go Vettel had the gap down to 4.8 seconds but he locked up on lap 56, dropping time and allowing Hamilton to extend his lead to 5.5 seconds; it soon became clear that Hamilton still had enough confidence in his grip to maintain the lead.

Vettel was pushing but could not make a significant dent in the world champion’s lead and Hamilton duly took the flag.