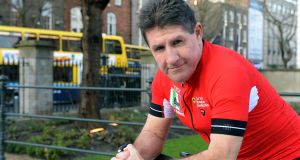 Left vulnerable after a legal fund to support him was stolen, journalist and former pro rider Paul Kimmage has lost a libel case taken against him by former UCI president Hein Verbruggen.

Kimmage tweeted images on Friday of the ruling from the court in Vevey, Switzerland. It came exactly a month after the hearing. According to the judgement, he must pay libel damages of 12,000 Swiss francs (€10,900) to Verbruggen, as well as various legal costs.

These include the costs of another former UCI president, Pat McQuaid, plus the UCI. All three had launched legal action against Kimmage in January 2012, although only Verbruggen ultimately persisted.

That action followed articles printed in the Sunday Times, l’Equipe and the American cycling website NYVelocity, in which Kimmage questioned their behaviour in relation to anti-doping and disgraced rider Lance Armstrong.

Rather than suing the publications concerned, they targeted Kimmage, who had just lost his job with the Sunday Times.

He said at the time that ‘hell will freeze over before I issue either of those gentlemen an apology for anything.’

According to Friday’s ruling, Kimmage must publicise the court’s decision in notices in those three publications, as well as the Geneva-based newspaper Le Temps.

He has also been barred from making any further claims against the Dutchman, specifically that he, ‘knowingly tolerated doping, concealed test results, is dishonest, does not behave responsibly, did not apply the same rules to everyone, did not pursue Lance Armstrong after he had been provided with a backdated certificate.’

Kimmage’s defence was complicated by his then-unemployment, as well as the disappearance of a fund set up to fight his case.

Slightly over $92,000 (€82,785) was given by donors from around the world, including triple Tour de France winner Greg LeMond. The Canadian Aaron Brown was one of those with control of the fund. In April 2013 it emerged that Brown had transferred the fund out of the PayPal account that originally housed it, and that he was refusing to turn it over to Kimmage or to a neutral third party.

A class action lawsuit was taken in Massachusetts on behalf of the donors. In April of last year final judgement was rendered against Brown, who was instructed to pay a sum of over $85,000 (€76,500). He has refused to do so. He is understood to be living close to Barcelona, Spain, and ongoing efforts are being made to enforce that ruling.

Left without that fund, Kimmage was pledged support by the Skins clothing company, although his defence was undoubtedly affected.

He has not yet indicated if he intends to appeal the decision. Efforts to reach him Friday for comment were unsuccessful.

1 Royal Portrush: Golf clubs ‘in real distress’ as eyes turn to 2021
2 Colin Kaepernick’s exile is too fresh for NFL to speak out on US protests
3 Connell losing touch with club championship is real tragedy of Normal People
4 Rodgers shunned by some family members for leaving Celtic
5 Ken Early: Why international football is fading into obscurity
Real news has value SUBSCRIBE