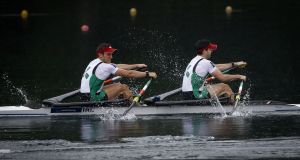 Gary and Paul O’Donovan came second in their heat of the men’s lightweight double at the European Rowing Championships and now face a repechage in their attempt to make the semi-finals. Photograph: Srdjan Stevanovic/Inpho

Conditions at the beautiful Racice course were mercurial on day one of the European Championships: blazing sunshine defaulting to cloudy and cool at the Czech venue. Paul and Gary O’Donovan had a mixed day, too– they finished second in their heat of the lightweight double but then nailed down a semi-final place with a competent win in their repechage.

The story told was not so much a crew with up and down performances as one seeking their old hot form among company who seem to have already found theirs.

Olympic champions France looked the pick of the heat winners. Poland, who were pushed by Ireland in heat three, had the fastest time. Italy and Germany won their heats. Britain, the Czech Republic and the Netherlands, who all won their repechages, will join Ireland in the semi-finals – but just six crews will make the final.

It will take another lift in form for the Skibbereen men to launch a raid on the medals podium.

Ireland’s two other crews won their races yesterday. Denise Walsh is already having a great season and the 24-year-old won her heat of the lightweight single sculls by leaving the others in her wake. She looks well set for a medal on Sunday, though Saturday’s semis have to be negotiated first.

The lightweight pair of Shane O’Driscoll and Mark O’Donovan were also in the lead at all the important stages of their race for lanes. They will have a straight final come Sunday, and will have real hopes of matching their gold medal in the first World Cup regatta.

1 Red Bull poised to protest over Mercedes’ new steering system
2 Monica Seles: The warrior queen who could have been the best ever
3 The Best of Times: Ireland’s Golden Generation make Grand Slam history in 2009
4 Welcome to Iten in Kenya – home of champions and cheats
5 Nairo Quintana sustains suspected knee injury after being hit by car while training
Real news has value SUBSCRIBE