Czech player says she will be fit to compete at Wimbledon 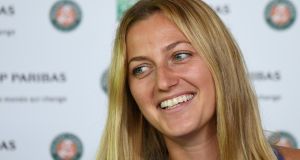 Czech Petra Kvitova has not played competitively since the attack in December, which left her with serious injuries to her left playing hand. Photograph: AFP/Getty Images

Czech Petra Kvitova said it was a “dream come true” to be included in the French Open draw on Friday having recovered from a stabbing during a burglary at her home in December.

Kvitova, who said this week she will be fit to compete at Wimbledon where she has twice won the title, has not played competitively since the attack, which left her with serious injuries to her left playing hand.

“I knew this day would come. I’m really happy that really here, the dream comes true,” she told reporters.

“I’m here in the draw and I’m playing tennis again. It was a difficult time for me but I’m happy that I worked through this.”

The 27-year-old, who said she is now pain free, will be seeded 15th thanks to her protected ranking and will start with a first-round match against American Julia Boserup.

Kvitova, who reached the semi-finals in Paris in 2012, required four hours of surgery after protecting herself from a man wielding a knife who had gained access to her apartment block by posing as a utilities worker.

She sustained injuries to tendons in all four fingers and the thumb on her left hand. At the time she said she was “shaken, but fortunate to be alive”.

Kvitova, who won Wimbledon in 2011 and 2014, has made a faster than expected recovery.

“I know that my hand, it’s not perfectly ready,” she said. “It’s still not 100 percent, so we will see how everything goes, but I’m happy that I am able to play again.

“The hand doesn’t have that power and the strength yet, but I’m working on it. I’m happy that when I’m playing I don’t have pain in my hand.”

Kvitova said the stabbing had changed her mentality.

“I actually already won my biggest fight. I felt like the tennis was taken away from me and it wasn’t my decision,” she said.

“Suddenly I couldn’t do what I love. So I’m happy that I can be here and enjoy the tennis.

“I see life a little bit from a different angle. So I’m happy that I’m here. Sometimes I just stand outside and see the sun and say, ‘Oh, it’s beautiful’.”