On Athletics: Children in need of a running revolution before it’s too late 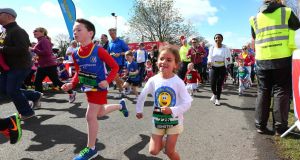 No, you won’t fool the children of the revolution. At least not into thinking a sugar tax and other political sweeteners will prevent the next generation of Irish children from becoming the fattest in Europe.

That might sound like a strange way of linking the centenary celebrations of the Easter Rising with the current health of the nation, but what else is going on this weekend?

Actually there is a direct link between events of 1916 and the health of Irish children at the time: the rebellion briefly stalled one of the most important sporting revolutions of the last 100 years, although not necessarily the way that was originally intended either.

What is certain is that the lives of countless Irish children were forever changed by that great meeting of minds upstairs in Wynne’s Hotel, Dublin, on the night of Monday, April 3rd, 1916. Because there, and through the foresight of great men like HM Finlay, it was agreed to stage the first Irish Schools Athletics Championships.

Finlay was then honorary secretary of the old Irish Amateur Athletic Association (IAAA) and was keen to establish a more regular athletics competition among Irish schoolchildren.

He saw two problems: firstly, the fall-off in affiliated club members after so many young Irish men went off to fight in the first World War; secondly, the need for a revolution in the minds of young Irish athletes. They needed loftier ambitions, including taking part in the still-fledgling Olympic Games.

Anyway, what neither Finlay nor anyone else could have possibly imagined at the time is that 100 years later the biggest problem for Irish children would be obesity. It certainly wasn’t part of his motivation to get children involved in athletics in 1916, but it would be the primary motivation in 2016, with obesity now recognised as the most prevalent childhood illness in Europe.

Our current adult obesity level is running at 25.6 per cent, with another 37 per cent overweight, but more worryingly 22 per cent of Irish five- to 12-year-olds are now overweight or obese.

This probably qualifies as some sort of health crisis. These figures will mildly fluctuate, naturally, but according to the World Health Organisation, on current trends, some 89 percent of Irish men will be overweight by 2030, and our children won’t be far behind. That would be a crisis.

But enough damn statistics. The sugar tax debate that is largely centred on tackling this childhood obesity issue was back in the news this week, and if or when the next government gets up and running it will soon be top-table agenda.

The UK’s new tax policy on sugar-sweetened drinks, which aims to raise around €662 million a year, is being greeted with mild optimism, with even Public Health England admitting there is no “robust” evidence to show what existing tax policies (such as in France) have on consumption or health.

Chances are this “fat tax” – to give it the less polite term – will end up being a largely cosmetic exercise. The children certainly won’t be fooled by it, in the same way they’re not being fooled into thinking one Easter Egg is enough anymore. The only true potential benefit is diverting that sugar tax straight back into school-based physical activities.

But that doesn’t need to be a costly exercise. One shining example of what the most simple of sporting activities can do for the health of children has come from St Ninians primary school in Stirling, Scotland, where for the past four years they’ve been getting every pupil to run one mile every day, typically in a 15-minute break just before lunchtime.

The results of this basic mile run have been so astonishingly beneficial that around 500 primary schools across the UK are now doing something similar, and there is a campaign underway to make it government policy.

There is now an almost zero rate of obesity among the children at St Ninians, after just four years, and perhaps just as importantly, according to the teachers, the pupils settle far easier into lessons after their daily mile run.

It shouldn’t require any great meeting of minds for something similar to work in Irish primary schools, as long there is an appetite for it, and few children of any age should need to be fooled into thinking running a mile a day is some sort of revolution.

England scrap sevens programme due to Covid-19 fallout 09:14
Manchester City now facing a rejuvenated Real Madrid 08:00
Bryson DeChambeau’s driver snaps on seventh tee at US PGA 07:28
McIlroy and Lowry in the mix at US PGA; Farrell knows Ireland will need to adapt 07:11
Sporting Cathedrals: Melbourne Cricket Ground a shrine that inspires reverence 07:00
Here is your handy guide to sport on television this week