On Athletics: Admitting to mental health problems is one of hardest things to do

Kenny Egan, John Leonard and Aisling Daly among speakers at conference in Dublin 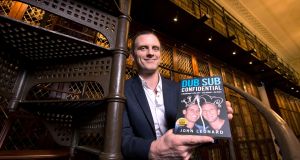 John Leonard, the former Dublin substitute goalkeeper, will discuss the impact of his award-winning memoir ’Dub-Sub Confidential’, Corinthian: Sports and Mental Health at the Sugar Club

Four years ago this week Martin Fagan made his first confession. He sat down in front of me at the Broomfield House Hotel in Mullingar and admitted he’d tested positive for erythropoietin, better known as EPO, which is one of the most effective yet readily detectable performance enhancing drugs. He admitted that he had willingly taken it too, ordering the EPO on the internet before administering it to himself at his training base in Arizona in such grimly crude circumstances that he felt the low of the junkie. No one forced him, no one promised any cover-up, and he’d no intention of contesting his ensuing two-year ban. Fagan was under no illusions either: he’d crossed an unforgiveable line, letting himself, his family and his sport down, and no matter what happened next he’d forever be known as a cheat. At the time he was Ireland’s most promising distance runner. Only now all hopes of qualifying for the London Olympic marathon later that summer were over.

Then he made his second confession – which in ways sounded more difficult than the first. As well as searching for EPO,he also admitted he’d found himself searching for suicide chat boards, what chemicals to take to die, with the least amount of effort, and pain. He’d been struggling with depression on and off for a couple of years and had suddenly reached his most desperate low. Part of the problem was that he was never able to admit it.

What happened next divided opinion: to some, Fagan’s confession was an increasingly familiar tale of the pressures and anxieties often felt by elite athletes; to others, his confession didn’t quite add up, and even if it did, his struggle with depression should have been kept separate. Certain other opinions reflected more traditional attitudes: “Sure everyone gets depressed. Pull yourself together.”

Four years on (Fagan is now retired from competitive running, despite qualifying for the Rio Olympic marathon) and still some of those traditional attitudes remain – particularly when it comes to the elite athlete. With the possible exception of a positive doping offence, there is still no more difficult confession for any athlete to make than a weakness in mental health, not just depression but with addictions such as drugs and alcohol.

No one knows this better than boxer Kenny Egan. He has long since confessed to his alcoholic tearaway after winning a silver medal at the Beijing Olympics, although he’s still coming to terms with the full implications of it. Indeed Egan is currently completing a course in counselling and addiction at the Cuan Mhuire Treatment Centre in Athy, and later today will make some further confessions as part of the First Fortnight festival, the charity organisation aimed at challenging mental health prejudice through the creative arts and spoken word.

Dub-Sub Confidential has already become a sort of handbook for anyone in sport struggling with mental health issues, and for good reason: not many footballers will openly confess to double-popping pills or turning up for training half blitzed. Yet Leonard is clearly in a better place now.

Aisling Daly is also open to talking about some of the mental health issues within professional MMA, again because it’s helped her confront and conquer some of her demons. Daly may appear unconquerable in the octagon, yet admits that no one within the MMA can afford to think they’re undefeatable. One of her former trainers at Straight Blast Gym, Kamil Rutkowski, committed suicide in 2014 and that, she says, opened a lot of eyes to the dangers of not exposing matters of mental health.

For Egan, however, the most important confession on any mental health issue is to oneself. “Thinking about what I was going to talk about on Saturday, the one person who kept coming into my head was Darren Sutherland,” he says. “I shared a room with Darren many a time, we travelled the world together, and he was the perfect athlete. I’d go off on drinking binges after fights, and he’d go back to bed.

“But inside he was screaming. He just felt he couldn’t speak to anyone about it. He kept it all bottled up and in the end it was too much for him, and he committed suicide. I managed to realise I had a problem, got help, talked to someone. And he didn’t, for whatever reason. It’s too late for him now. But he shouldn’t be gone.”

Part of what Egan preaches now is that the opposite of addiction is not sobriety; the opposite of addiction is connection. “And that means surrounding yourself with positive people,” he says. “It’s getting easier now than it was four or five years ago, but there is still a long way to go. Athletes will always want to keep it in. No one wants to expose a weakness. It’s difficult but the more people who confess to it, the easier it will become.” Corinthian: Sports and Mental Health takes place today at 2.0 in The Sugar Club. See  www.firstfortnight.ie

Scotland’s Gregor Townsend takes 25 per cent wage deferral 14:15
Rowing: Irish Championships may be held in December 13:54
Phil Mickelson ‘working on’ potential rematch with Tiger Woods 13:43
Jack Grealish needs to show that his remorse is real this time 12:13
Tottenham give 550 non-playing staff a 20 per cent pay cut 12:14
Here is your handy guide to sport on television this week