Olympic Federation told boxing will be part of Tokyo Games 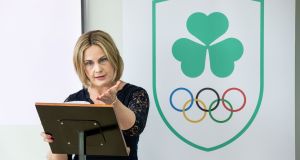 Olympic Federation of Ireland president Sarah Keane expects something in the region of €2m to flow into the OFI over the next two years from IOC funds. Photograph: Morgan Treacy/Inpho

The Olympic Federation of Ireland (OFI) has been told that boxing will be staged at the next Olympic Games in Tokyo despite a bitter ongoing dispute with the world governing body AIBA. The International Olympic Committee (IOC) put planning for the 2020 boxing tournament on hold following the disagreement over governance, financial probity and controversial AIBA president Gafur Rakhimov.

Rakhimov, who has not been charged with any offence but remains on a United States treasury department sanctions list as “one of Uzbekistan’s leading criminals”, recently announced he would step aside. Mohamed Moustahsane, head of the African Boxing Confederation, has been appointed as interim president.

The dispute has thrown serious doubt over the future of boxing in the Games and with Tokyo less than 18 months away no qualification process for the athletes has been agreed.

However, OFI president Sarah Keane, who regularly travels to the IOC headquarters in Lausanne for talks, says that officials have explicitly told her that boxing will be part of the Olympic schedule in Tokyo.

“We fly over every couple of months to Lausanne. We meet them. We talk about various issues. The last time we met them, we talked about boxing, we talked about karate, things that are going on,” explained Keane.

“What they said about boxing was boxing will be in the Games. And that was the big thing we needed. We asked them if there were to be any surprises to please let us know because boxing is so important to our nation. They were very frank discussions. We don’t get access to [IOC president] Thomas Bach that often but we are dealing with the highest level of international relations.”

Executive director of AIBA Tom Virgets, a former president of USA Boxing, revealed the organisation was about €14 million in debt but claimed it would be reduced by €2.7 million by the end of this year.

Keane also said she expects something in the region of €2 million to flow into the OFI over the next two years from IOC funds.

“They [the IOC] agree to top sponsors contracts,” she said. “They are normally four to eight years and they then agree with you that you won’t have anyone in your territory that will conflict with those sponsors and as a result they pay you a certain amount of money. That’s quite significant. We will bring in probably over €2 million over the cycle.”