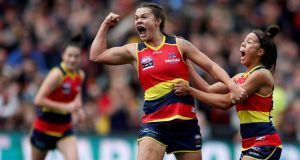 Anne Hatchard celebrates after scoring the first of Adelaide Crows’ 10 goals in the AFLW Grand Final match against Carlton Blues at the Adelaide Oval on Sunday. Photograph: David Mariuz/EPA

In front of a record crowd of 53,034 at the Adelaide Oval, Clare’s Ailish Considine completed her debut season in the Australian Football League (AFLW) in some style by helping Adelaide Crows to their second Grand Final victory in three years. Carlton were no match for the team that won the inaugural league in 2017, the Crows beating them by 10.3 (63) to 2.6 (18) with Considine among their goalscorers.

The 26-year-old, who has played both Gaelic football and camogie for Clare, was one of four Irish women offered contracts by Australian clubs last September after a successful trial at the CrossCoders’ international camp in Melbourne, the programme that offers overseas players from other sports the opportunity to play in the AFLW. The others were Donegal’s Yvonne Bonner, who joined Cora Staunton at Greater Western Sydney Giants, Tipperary’s Aisling McCarthy, who was signed by the Western Bulldogs, and Mayo’s Sarah Rowe who joined Collingwood.

Considine has been part of a Crows team that lost their opening game of the season by a point to the Bulldogs, but then went on an eight-game winning streak before their 45-point trashing of Carlton, the contest all but over after they scored eight goals in the opening two quarters, Considine’s coming early in the first.

The only dampener in a commanding performance by the champions was the serious injury sustained by their star forward Erin Phillips, a former Olympic silver medallist with the Australian basketball team, who tore the anterior cruciate ligament in her left knee in the third quarter. Another of their players, Chloe Scheer, suffering a similar injury earlier in the game

Considine, whose sister Eimear plays rugby for Ireland, had been an ever-present for the Crows until their round six game against Sydney for which she was dropped, but she returned to score two goals against Melbourne Demons in the next round to secure her place in the team for the final.

The previous record attendance for an AFLW match was set at the beginning of last season when 41,975 turned up to see Perth take on Collingwood. Sunday’s crowd of 53,034 the fifth biggest to attend any football game at the Adelaide Oval.

The organisers had, according to Australian reporter Elspeth Hussey, been anticipating a crowd of 25,000 leading to some chaos before the game with not enough gates or sections of the ground open. In the end, the top tiers of the stadium, which had been closed, had to be opened to accommodate the crowd.

1 Gary Neville in Qatar an exercise in semi-journalism
2 Six Nations: Ireland are contenders but England still the team to beat
3 In Donegal Michael Murphy is seen, simply, as a godsend
4 Mike Catt hopes to have Irish backs purring in Six Nations
5 Owen Doyle: Creeping professionalism of schools rugby a threat to the game
Real news has value SUBSCRIBE