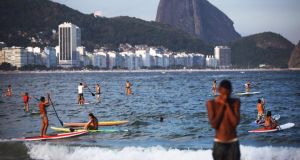 Athletes, who have been to training camps in and around the Olympic course, have described water that was heavily contaminated with sewage and believe it is a health risk.

In a statement released to The Irish Times yesterday, the OCI said they will address the Irish sailors’ concerns. “The Irish Sailing High Performance Team did not consult with the Olympic Council of Ireland on this matter so the OCI would need to ascertain the full extent of their concerns.

“However the president of the OCI, Pat Hickey, who is a member of the International Olympic Committee’s, Rio 2016 Coordination Commission has not heard of this level of pollution.

“If there is any supporting evidence from the Irish Sailing Association we will ensure that the IOC Coordination Commission and the Rio 2016 Organising Committee and the International Sailing Federation and appropriate stakeholders review it within their due processes.”