Nadal and Federer on course for first US Open battle

Duo ease through third round as possible quarter-final looms 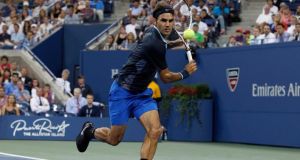 Roger Federer of Switzerland chases down a backhand to Adrian Mannarino of France at the US Open tennis championships in New York. Photograph: Adam Hunger/Reuters

Roger Federer and Rafa Nadal remained on course for a tantalising first ever collision at the US Open after demolishing their opposition at Flushing Meadows on Saturday.

The two great rivals have never played each other at the year’s final Grand Slam but are drawn to meet each other in the quarter-finals next week, and they moved a step closer by winning their third-round ties in brilliant fashion.

Federer, playing the feature night match at an buzzing Arthur Ashe Stadium, doled out a 6-3 6-0 6-2 hammering to Frenchman Adrian Mannarino but knows the focus is already on the possible meeting with Nadal.

“I have gone through that my entire career, people talking about our matches even before the tournament started,” he said.

“We’re used to it. We know how to handle it. Clearly I think we both hope it’s going to happen this time for the first time in New York.”

Earlier in the day, when the sun was at its hottest, Nadal turned on his own masterclass to brush aside Croatia’s Ivan Dodig 6-4 6-3 6-3 and lead a trio of Spanish men into the fourth round.

Former world number one Caroline Wozniacki and the 2011 Wimbledon champion Petra Kvitova were among the high-profile casualties in a women’s draw packed with surprises.

Camila Giorgi, who had to come through the qualifiers to reach the main draw, sent Wozniacki packing with a 4-6 6-4 6-3 win on Arthur Ashe Stadium while Flavia Pennetta knocked out the former US Open champion Svetlana Kuznetsova 7-5 6-1. Roberta Vinci also won for Italy.

Nadal has been in great form in the past month, winning warm-up tournaments in Montreal and Cincinnati. He has not dropped a single set in getting to the last 16 at Flushing Meadows and believes he is still improving.

“I played better today than in the previous matches. (That’s) always a positive thing,” he said.

While Federer and Nadal cruised into the next round, a feisty Victoria Azarenka dropped her first set of the tournament before recovering to book her place in the last 16 of the women’s draw.

A finalist last year and one of the favourites to win the title this season, the world number two and reigning Australian Open champion overcame a shaky start to beat Alize Cornet of France 6-7(2) 6-3 6-2.

The Belarussian was given a tough workout from Cornet and allowed her frustrations to boil over when the umpire ordered a point she had won be replayed.

“That was the most ridiculous thing there is,” Azarenka growled.

Former world number one Ana Ivanovic had to dig deep to avoid joining the exit queue. The Serbian was on the brink of defeat in her match against American Christina McHale before recovering to win 4-6 7-5 6-4. She plays Azarenka next.

“I know what to expect,” said Ivanovic. “I really want to play against the best and challenge myself, because I’m ready to take them on.”

The US Open is the only Grand Slam where Kvitova has failed to at least make the quarter-finals and the Czech said she was unable to play near her best after contracting a virus.

“Unfortunately I was lying in the bed yesterday and I had a fever,” Kvitova said. “I tried to play, tried to fight. But my body wouldn’t let me fight.”

Riske burst into tears after her win. The 23-year-old, who still travels with a security blanket that was given to her on the day she was born, has had a long road to her first fourth round appearance at a grand slam.

She first tried to qualify for the US Open in 2007 and had never won a main draw match until this year. Now she is through to the last 16, and facing a showdown with Daniela Hantuchova, who saved four match points in her 3-6 7-5 7-6 (4) win over Israeli qualifier Julia Glushko.

“The blankie story is out,” Riske said. “I’m used to it now. I can’t deny it now. It’s getting smaller by the week. It can fit in the palm of my hand.”