Middleweight not letting international success distract him from domestic duty 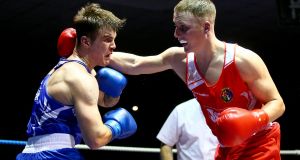 Michael O’Reilly on his way to beating Athy’s John Joyce to book his place in national final. Photograph: Donall Farmer/Inpho

Michael O’Reilly will not allow his international success to distract him from his domestic duties as he chases a third Irish middleweight title in a row at the National Elite Championships finals on Friday.

The Portlaoise middleweight has enjoyed a successful year, and is now ranked as the number three middleweight in the world after claiming his second national title last January, gold at the European Games and World Championship bronze, with the only low being his controversial Olympic box-off defeat at the latter tournament.

That defeat, which saw Egyptian Hosam Abdin awarded a contentious points win over the 22-year-old Irishman, means that O’Reilly must now pursue a place at next year’s Olympic Games in Rio via an international qualifier.

In order to get that chance, O’Reilly must retain his Irish middleweight (75kg) title and he made an ideal start to that mission last Saturday night, defeating Athy’s decorated underage champion John Joyce to book another national final.

However, O’Reilly, is not dismissing his domestic rivals on the back of his international success. “I suppose you’d be very confident going in [the ring], knowing you’re number three in the world, but it doesn’t make a difference,” he said.

“Just one simple shot and you could be knocked out, so you can’t be too confident in the ring, you have to be clever and do what you do best and that’s it.”

O’Reilly will meet St Monica’s Connor Wallace in Friday’s final after the latter’s win over Eddie Byrne of Na Fianna, while the Portlaoise man’s brother and club-mate Bernie will contest the heavyweight (91kg) final against reigning champion Darren O’Neill.

The 2016 edition of the championships is being held early ahead of Olympic qualifiers next year.

Ireland’s four qualified boxers for Rio – Paddy Barnes, Michael Conlan, Joe Ward and Steven Donnelly – are not competing, but competition remains intense at a number of weights with places in Rio up for grabs.

McComb claimed a split-decision victory over old foe George Bates, admitting: “It was close going into the last round and it was just about staying composed, calm and using my experience.”

Meanwhile, light-flyweight (49kg) champion Brendan Irvine has moved up to flyweight (52kg) in the hope of claiming an Olympic place.

“We’d be close enough and it’s terrible what happened to his mum,” said Irvine of his friend’s loss. “Fights are never friendly, but it’s a job and we just have to get on with it.”