16,000 sing 37-year-old’s name at 5am in Manchester as sport continues to blossom 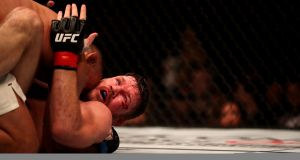 Cut off Michael Bisping at the neck and you will likely find that he is still goading you to come back for more as his head goes rolling across the floor. He is a man who absolutely will not quit. Which is why, at the age of 37, he has become the first Briton to win a UFC world title, and, in defending it in the early hours of Sunday, the first person ever to win 20 fights in their UFC career. Two days before his latest victory, against Dan Henderson at the Manchester Arena, Bisping was asked why he is still fighting after all this time. The money, he said, and more than that, he just loves the buzz he gets when he wins. “It’s a great feeling. Anyone that’s ever won a fight knows that.”

We can only guess exactly how good Bisping felt after beating Henderson. Nobody got a chance to ask, because he was sent straight to the hospital. He had predicted that there would be “a few sore heads on Sunday morning”, but however much anyone drunk, nobody can have had a bigger headache than the one he must have been suffering. Henderson caught him flush, twice, with his lethal over-hand right, a punch so famous that it has its own nickname: the H-Bomb. Henderson, 46, retired right after the fight. It possibly was not a personal decision so much as a public demonstration of the USA’s continuing commitment to strategic nuclear disarmament.

Henderson did not have to go to the hospital but may have called in at a local stone masons so they could smooth off the chips Bisping’s kicks left in his granite edges. “Honestly,” Henderson said afterwards, “I didn’t feel hurt once in that whole fight.” He felt like he had won, but had the good grace to say: “Unfortunately not everyone saw it that way,” and leave it at that. It is not the damage done that the judges reckon, but the number of clean shots landed. And, just as he did against Anderson Silva in London earlier this year, Bisping won on points because he kept pecking away.

Some argue Bisping got the benefit of the doubt because both these close fights were in Britain. If they were home decisions, he certainly earned them. Against Silva, he recovered from being knocked out by a flying knee at the very end of the third round. Against Henderson, the bell was no help, and he had to fight his way up off the ground against an opponent who fell on him like a hungry bear on a side of cold salmon. Winning, as all Rocky fans know, is not just about how hard you hit but how hard you can get hit and keep moving forward.

By that measure, there are not many tougher athletes than Bisping in Britain right now, nor, perhaps, any who better prove the truth of George MacDonald Fraser’s dictum that what we call bravery is actually “half panic, half lunacy”. Bisping really deserves to be better known. You could not exactly call him unsung, not after 16,000 fans joined together in one long and raucous chorus of “Stand up, if you love Bisping!” at 5am on a Sunday morning, but he has achieved so much that if he lived in another country, or practiced another sport, he surely would be a household name, his battered mug splashed across the front pages of day’s papers.

The British fighters who come after him may achieve exactly that, given that their sport is now being broadcast by BT and covered by the BBC. Over the last 15 years the UFC has been moving inexorably into the mainstream, though its progress in Britain has been slower going than the organisation imagined. In 2001, the two Vegas casino kingpins Lorenzo and Frank Fertitta, bought the business for just $2m. This summer, they sold it for $4.2bn, to WME-IMG, the mega-agency who run, among many other things, Miss Universe, New York Fashion Week, and the Professional Bull Riders rodeo. And in November, the UFC will finally hold a fight night in New York, at Madison Square Garden, having recently overturned a long-standing ban in the state.

Those who know say WME-IMG are still trying to figure out exactly what it is they have bought. But it is immediately clear what the UFC have got out of the deal. Just this month, it was announced that 23 celebrities had invested in the UFC, for, according to reports, a minimum stake of $250,000 apiece. Among them the chat show hosts Conan O’Brien and Jimmy Kimmel, a handful of Hollywood celebrities, like Ben Affleck, Mark Wahlberg, and some sports stars, Tom Brady, and the Williams sisters. All, of course, WME-IMG clients.

WME-IMG describe themselves as “the nexus of sports, entertainment, and fashion”. A key part of the UFC’s appeal is the way in which it straddles sport and reality TV, which they use to build emotional ties between their fans and their fighters. Bisping got his break on season three of the UFC show The Ultimate Fighter. And this, his second fight with Henderson, came about because of the rivalry the two men developed during season nine. They coached opposing teams, and then fought each other at UFC 100, in 2009. Henderson flattened Bisping with (what else?) that patented punch of his, in one of the most famous, and humiliating, knock-outs in UFC history.

Seven years later, Henderson is not even among the UFC’s top 10 middleweights. There are higher-ranked fighters who deserved the title shot he just got. But he has the backstory, and the UFC decided this was the fight people most wanted to see. They were not just selling the sport, but the storyline they had presented on TV. As WME-IMG CEO Ari Emanuel told the New York Times: “When we look at the world, we see fashion, sports, movies, TV, books: They are all just different aspects of global entertainment consumption.” Some fight fans will hate the fact, but the UFC will fit right in. Norman Mailer described boxing as a twentieth century art. The UFC is a very 21st-century concoction.

1 Awarding of 2023 Rugby World Cup to France part of Laporte investigation
2 Suarez’ Italian language exam rigged according to prosecutors
3 What next for green jersey hero Sam Bennett after toughest of Tours?
4 Gerry Thornley: Talk of Anglo-French hegemony is over the top
5 LeBron James has become this generation’s Muhammad Ali
Real news has value SUBSCRIBE