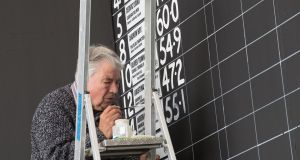 The results from the dressage display are hand painted on a display board on the second day at the Mitsubishi Motors Badminton Horse Trials. Photograph: Matt Cardy/Getty Images

French and German riders dominated the top of the leaderboard following Thursday’s first day of dressage at the Mitsubishi Motors Badminton horse trials in England.

Thibaut Vallette, a member of France’s gold medal-winning team at last year’s Olympic Games, was in the lead overnight with Qing du Briot on a score of 38.7 penalties. A first time competitor at Badminton, Vallette (43) is a coach at the Cadre Noir national riding school in Saumur.

Germany’s Bettina Hoy (54), a former European champion, is next best with Designer 10 (39.2). This combination finished 20th last year before going on to place sixth at Burghley which, like Badminton, is one of just six four-star events held worldwide each year.

Hoy’s compatriot Michael Jung, the reigning Olympic and European champion and current World No 1, was in third place overnight with the 18-year-old gelding La Biosthetique Sam (40) on which he won this event 12 months ago. The 34-year-old is bidding to win a second four-star event in a week following victory last weekend in Kentucky with the mare fischerRocana FST.

The remaining four Irish riders compete on Friday starting with Dominic Furnell from Co Limerick on the mare Ballycahane Flower Power at 10.34. The other combinations are Jonty Evans and his Rio de Janeiro mount Cooley Rorkes Drift (14.30), the youngest rider in the competition 20-year-old Cathal Daniels with Rioghan Rua (15.02) and Ciaran Glynn who was the last Irish rider to make the starting line-up with November Night (15.10).

Based near Cheltenham, Evans last competed at Badminton 10 years ago while the other three are making their debuts at the four-star event.

While the four-star competition is the highlight of the fixture, the huge trade area draws in thousands and there are many Irish firms exhibiting at Badminton this week.

These range from clothing firms such as Dubarry of Ireland and Georgia in Dublin, to equestrian equipment (Holmestead Saddlery) and feed supplements (Horse First). The Bangor-based company KAN Teq is on-site with its main product being the KAN body protector which was specifically designed for female riders. Irish Horse Gateway, the marketing arm of the national governing body Horse Sport Ireland, also has a stand.

The main eventing action at home this weekend takes place on Sunday at Punchestown racecourse, a venue making a welcome return to the Eventing Ireland calendar after a lengthy break. The fixture has received the maximum entry of 300 combinations.

Sunday’s event stages the first leg of the Irish Sport Horse Studbook series for young event horses while the second round of the show jumping equivalent will be held over the weekend at Barnadown in Co Wexford. Sixty-one horses have been entered for the venue’s National Grand Prix.

In international show jumping news, Irish riders are competing on both sides of the Atlantic this weekend with five-star action taking place in Versailles, France where Bertram Allen and Denis Lynch are competing.