Road race champion yet to reveal set-up for 2015 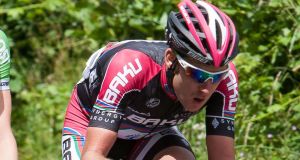 Matt Brammeier is yet to make his plans for next season public. Photograph: Ciaran Fallon/INPHO

The start of 2015 is just over a month away but multiple Irish road race champion Matt Brammeier is yet to make his plans for next season public.

Brammeier, who has won five Irish Elite titles in all, competed this year with the Synergy Baku team. It races as a UCI Continental team, so it can’t gain entry to many top events in Europe. He is keen to try to return to a bigger set-up in 2015, and has said he is willing to work for another team in order to do so.

In the past Brammeier has ridden with top ranked teams such as HTC Highroad and Omega Pharma-QuickStep, backing up sprinters such as Mark Cavendish. Returning to such a role would suit his characteristics, both as a lead-out rider and also as one who could attack from far out and prevent the team having to drag the peloton along to control things.

Although Brammeier has not yet indicated the team with whom he will be racing, it is thought that the identity of his 2015 squad will be made public soon.

Meanwhile, in other news, Cycling Ireland (CI) has laid out its strategy plan for the upcoming years. It has seen a growth in membership from 5,600 to 23,000 since the launch of its previous strategy plan in 2009, as well as a jump in the number of clubs, from 174 to 398.

In addition to that, female membership rose from eight to 18 per cent. In terms of competitive achievements, the federation’s riders secured 19 gold medals between 2010 and 2014.

The current strategy plan was drawn up in conjunction with W2 Consulting. The document includes what CI refers to as Vision 2020, namely that it will become “the leading contributor of medals at World, Olympic and Paralympic levels whilst delivering sustained growth across all cycling disciplines and increased use of the bike across society.”

It also wants a better financial model to be in place, with a target of 60 per cent of funding from non-government sources a goal. Bringing competitors through from grassroots to professional level is also a target.

The latter goal is one which can be enhanced by stepping up track racing in Ireland and, to that effect, CI is committed to creating Ireland’s first indoor velodrome.

They recently applied to Fingal County Council for planning permission for a building at Abbotstown and should hear early next year if that has been accepted.

1 The Offload: Ireland are stuck in no man’s land
2 Nicky English: Galway and Waterford face battles with fatigue in All-Ireland semis
3 Crowds of 4,000 to return to sporting events in England from next week
4 Every kind of wind imaginable was against Tipperary football - and they came through
5 Tipperary and Cavan deliver two earthquakes in one day
Real news has value SUBSCRIBE

Giroud remains part of Chelsea plans, says Lampard 18:25
Crowds of 4,000 to return to sporting events in England from next week 17:32
Former Ireland assistant manager Maurice Setters has died aged 83 17:06
Davy Russell on neck injury: ‘it was a very close one and I dodged a bullet’ 17:00
Aidan Coleman steps in for the ride on returning Epatante 17:00