Maria Sharapova romps into third round at French Open 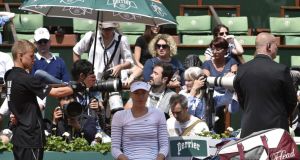 Russia’s Maria Sharapova rests during her match against Russia’s Vitalia Diatchenko during the women’s second round of the Roland Garros 2015 French Tennis Open. Photo: Getty Images

Defending champion Maria Sharapova moved easily into the third round of the French Open with a 6-3 6-1 defeat of fellow Russian Vitalia Diatchenko on Wednesday.

The world number two, wearing a long-sleeved top despite the warm temperatures on Court Philippe Chatrier possibly due to the cold she has been suffering from, took a while to get into her stride but romped away from her 91st-ranked opponent.

Sharapova, who has won two of the last three French Opens and was beaten by Serena Williams in the 2013 final, broke serve in the first game but a double fault gifted Diatchenko a break back to 2-2.

Diatchenko then coughed up two double faults in the next game to hand the advantage back to Sharapova and another double fault brought a lukewarm first set to a conclusion.

Sharapova then powered through the second set in 35 minutes, offering up few errors.

Things will toughen up for the five-times grand slam champion in the next round when she faces Australia’s Samantha Stosur, the runner-up in 2010 and twice a semi-finalist, who she beat in the fourth round last year.