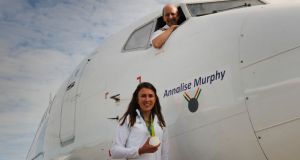 Not long after her glorious homecoming with Olympic silver, attention began to switch to the other part of Annalise Murphy’s triumphant sailing story – her boat.

The whereabouts of the Laser Radial – supplied to competitors for all Olympic races – had become something of a mystery.

Initial efforts to purchase the boat came to nothing and there was even an unfounded rumour that the boats used by the gold, silver and bronze medal-winning trio had been snapped up by a mystery millionaire in Brazil.

“This boat is now part of our maritime history so it would be nice to see it in the Maritime Museum in Dún Laoghaire, ” sailing coach Rory Fitzpatrick said earnestly at the homecoming press conference last week.

Murphy christened her Laser Good Egg in a short naming ceremony just before the Olympic races got under way.

Asked what she intended to do with the boat on her return to Ireland, she said: “I was trying to see if I could buy the sail after racing but they wouldn’t let us. I’m not really too sure what’s going to happen to it. I’ll have to try and see if I’ll be able to get it back home.”

Its value to sporting history, however, is arguably more difficult to quantify, representing Ireland’s first sailing medal since David Wilkins and James Wilkinson in the Flying Dutchman class in 1980.

Murphy’s mother Cathy McAleavey told The Irish Times that while the boat may seem a little too modern for a museum, it was about keeping an eye on when contemporary achievements became history.

Unfazed by the initial uncertainty over Good Egg’s whereabouts, she sent a tentative email to Laser Performance, the manufacturer, last weekend.

Within 20 minutes she had a personal response from chief executive Bahman Kia, offering the boat as a gift in recognition of Murphy’s achievement.

It will be shipped from Brazil to the UK, from where Murphy will arrange for its final leg of the journey next October.

“I didn’t even have a proper email for them,” Ms McAleavey said. “I went on the website and it was one of those general ones where you fill out the box. I asked if we could buy it because normally they use them at another event, and then there was a rumour that someone had bought them in Brazil.”

Murphy – who had a 737 aircraft named after her yesterday – said she was delighted the boat had been found.

“She tried to get it when she was out in Rio and nobody seemed to know what was happening to them and then she had to leave,” said Ms McAleavey.

Now the prospect of the boat finding its home at the National Maritime Museum seems a lot more likely.

Manager Declan Traynor said the prospect was welcome but they would have to receive a formal approach.

“The fact that we are on the doorstep of the National Yacht Club [where Murphy and her family are members], it would be ideal,” he added. “From the museum’s point of view, we would love to have it here.”

Talk of athletes getting Covid-19 vaccines early is growing louder 14:02
Sam Underhill out of England squad in latest blow ahead of Six Nations 13:40
Mo Farah says athletes told they will receive vaccines before Olympics 12:33
Six Nations 2021: Could Finn Russell inspire a Scottish challenge? 11:00
Struggling Liverpool have lost their fun-loving flair 10:27