Lynch through to medal race final at Palma regatta 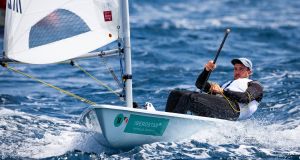 After a breezy finale to the fleet racing at the Princess Sofia regatta for Olympic classes in Palma, Carlow sailor Finn Lynch has qualified for Saturday’s medal race final and possibly a podium result.

Although reaching the top ten in the 187-strong Laser class, Lynch was disappointed with his final race which proved to be his worst of the week as he finished in 26th place.

Anything more like his earlier form would have made the job of getting a medal more manageable in what is certain to be a hard- fought contest amongst the ten boats. Lynch is seventh overall but just three points away from the podium.

Nevertheless, any result will have delivered on his pre-event expectations and his performance even eclipsed that of Robert Scheidt, the Brazilian sailing legend with five Olympic medals to his credit, who failed to make the top ten this week.

The Laser class Gold fleet had other Irish significance as Howth’s Ewan McMahon finished off only his second senior fleet appearance – and first time at Gold fleet level – in 29 th place overall.

The result means he is the top U-21 year-old for the class at the event and it makes him a strong challenger for Lynch in the run up to Tokyo 2020 qualification.

The Palma regatta is the first of two to select Ireland’s representative for the Olympic test event in Japan in August. The second event is the Genoa Sailing World Cup event in two weeks’ time where all the Irish Sailing squad will be in action.

In other Irish results from Mallorca, Ballyholme’s Ryan Seaton with Crosshaven’s Seafra Guilfoyle closed out their 49er skiff Gold fleet in 19th overall after counting a 12th and a 10th in yesterday’s brisk onshore breeze.

The Laser class medal race is scheduled to start at 11am Irish time on Saturday.