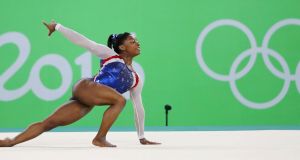 Simone Biles of USA competes on the floor during the women’s individual all-around final. Photograph: Reuters

Simone Biles stood by herself atop the podium as her national anthem played, the thousands of Swarovski crystals adorning her red, white and blue leotard glimmering in the spotlight that was hers alone – a familiar perch for the teenager who has towered above gymnastics for the past three years.

The 19-year-old from suburban Houston captured her second Olympic gold medal of the Rio Games on Thursday afternoon, winning the individual all-around competition – the sport’s ultimate prize – after anchoring the United States to a crushing win in the team competition two days ago.

It was less a competition than a coronation for Biles, who has now won the last 14 all-around meets she has entered – including three world and four US national championships – dating back to her debut season as a senior gymnast in 2013. The strength, form and fearlessness that have become her calling card were all on full display. No one then or now even approaches her level of difficulty or execution.

Biles – a once-in-a-lifetime athlete who makes the unthinkable look elementary, who makes the extraordinary look effortless – paced the field of 24 gymnasts with 62.198 points. Her American team-mate Aly Raisman won the silver with a score of 60.098, followed by Russia’s Aliya Mustafina with 58.665.

The Texan began her afternoon on the vault, surging down the platform and launching into a sky-high Amanar before landing with a hop and a step forward. She earned 15.866, good for first place and 0.233 ahead of Raisman. Rebeca Andrade, the breakout Brazilian ingenue buoyed by a home crowd, was third with 15.566 after the first rotation.

Next was the uneven bars, Biles’ worst discipline, which is to say the lone event final she did not qualify for – and the 4ft 8in phenom followed Raisman’s rotation-opening score of 14.166 with a solid mark of 14.966. This was where Mustafina needed to post an massive score in the hope of closing the gap with the Americans. Her 15.666 was enough to move 0.034 points ahead of Biles through two rotations, while her team-mate Seda Tutkhalyan (15.033) moved past Raisman into third.

It wouldn’t be enough.

Biles led off the third rotation on the beam and stuck her routine with only a couple of minor wobbles, hitting the dismount perfectly and waiting a beat as the applause cascaded down. The score of 15.433 was enough to lift her back into first, though it left room for her rivals. An enquiry into the score was rejected.

But Mustafina was unable to keep the pressure on, making several bobbles and taking a large step on the landing. Those errors combined with the reduced difficulty level of the 21-year-old’s set produced a score of 13.866, dropping her to second in the standings entering the final rotation.

That set the stage for Raisman, whose solid, composed beam routine – a score of 14.866 second only on the apparatus to Biles – moved her into third, while Andrade slipped further down the standings to seventh after two significant bobbles followed by a small hop on the dismount resulted in a score of 13.600.

Then came the final rotation, where Mustafina’s imperfect floor routine, including drops out of turn and steps on her tumbling, produced a score of 13.933. For Raisman it offered a chance to win a medal and a shot at redemption. The 21-year-old American had tied for third in the all-around with Mustafina in London but a tie-breaker – counting only the three highest apparatus scores – had left her off the podium. With her team-mates cheering their captain from the stands, Raisman delivered a flawless routine that assured her the silver.

Biles needed only better than 13.833 points to clinch the gold going into the floor exercise, where she is three-times defending world champion. After a 56-minute wait between apparatuses, the Texan climbed the carpeted stairs to the competition podium and delivered a routine of immaculate quality punctuated by her signature – a double somersault with her body fully extended followed by a half-turn at the end – a manoeuvre so difficult it’s been named after her.

Afterward Biles cried through laughter as she embraced her long-time coach Aimee Boorman before hugging Raisman, the victory in hand before the scores were made official. The final score of 62.198 showed Biles’ marked improvement from her championship-winning scores at the worlds last year (60.399), in 2014 (60.231) and 2013 (60.216).

It was a triumph for Biles and Boorman, who discovered the eight-year-old at Bannon’s Gymnastix. The pair have grown together during an eight-year journey that ended on Thursday at the Rio Olympic Arena with the sport’s most prestigious trophy.