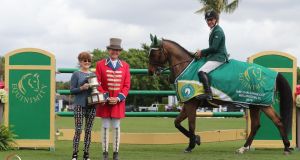 An extended weekend of action for Ireland’s international show jumpers concluded on Sunday at Deerirdge Farm in Wellington, Florida where Conor Swail finished fourth in the FEI World Cup qualifier.

The starting line-up of 38 included six Irish competitors with Swail and Co Mayo native Cormac Hanley progressing to the jump-off round where they faced seven rivals over the shortened course designed by Ireland’s Alan Wade.

While Hanley had one down with VDL Cartello to finish eighth, Co Down-born Swail recorded one of just four double clears, stopping the clock on 44.68 seconds with Vanessa Mannix’s 11-year-old Holsteiner gelding GK Coco Chanel. The USA’s Alex Granato claimed the honours when home in 42.70 on Carlchen W.

Also in Wellington, but at the Palm Beach International Equestrian Center, Irish riders’ best result came in Thursday’s fourth round of the Equinimity WEF Challenge where they filled three of the top four places.

A large starting line-up of 65 combinations took on the first-round track designed by Brazil’s Anderson Lima in the grass Derby field but just six qualified for the jump-off.

The first second-round clear was set in 44.23 by the USA’s Carly Anthony with Clochard but Co Tipperary native Kevin Babington, who was second last to jump, knocked more than four seconds off that time when home in 40.03 with his longtime partner, the Irish Sport Horse gelding Mark Q.

Darragh Kenny, riding Veronica Tracy’s Chinook II, was the final competitor to take on the shortened track and, while leaving all the fences standing, had to settle for second when stopping the clock on 40.84. Newry-born Lorcan Gallagher had a fence down with Hunters Conlypso II to finish fourth.

A son of the still active Oldenburg stallion OBOS Quality 004, the now 17-year-old Mark Q was bred in Co Carlow by John and Barbara Walshe out of the mare Abbey Emerald which was by the thoroughbred Positively. Babington has ridden the bay gelding, which excels on grass, for the past 10 years.

In the two-star Grand Prix at the same venue, Kilkenny’s Anna Carway placed third on Ajaccio having picked up a single time fault in round one.

At the two-star show in Aarhus, Denmark, Limerick-born Shane Carey won his third Grand Prix in as many weeks on Maria Gretzer’s nine-year-old Dutch Warmblood mare Fecybelle. Their clear jump-off round in 35.84 in Saturday’s 1.45m class saw them finish over three seconds ahead of their nearest challenger. This latest victory comes on the back of a double of victories for the combination weeks at Sopot in Poland.

In other news, Irish Olympian Judy Reynolds is up 19 places to 35th in the latest FEI World individual dressage rankings which were published on Friday.

While it’s quiet on the eventing front at present, there was a win of sorts for Ireland when it was announced on Friday that the Duggan family in Millstreet will be hosting a leg of the Event Rider Masters at their Co Cork venue in August. This is the first time a round of the series will be staged in Ireland.