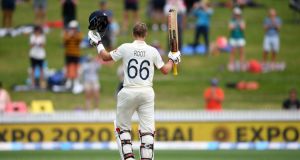 It remains to be seen whether England will board the plane bound for India on Wednesday with a series win over Sri Lanka secured and the gloriously named Moose Cup stashed among the mountain of suitcases and kitbags.

But what they do at least know after three days of hard-fought cricket in the second Test is that their captain, Joe Root, will land in Chennai in glowing form, having followed last week’s match-winning 228 with a sublime 186 from 309 balls. It augurs well for the next tour of this challenging winter and kept the scenario above just about alive.

Sri Lanka were certainly on top by stumps, however, with Root the ninth wicket to fall after a smart piece of work from Oshada Fernando at short leg saw him run out in the final over of the evening session. He trudged off the field exhausted after more than eight hours out in the middle, with England closing on 339 for nine – still 42 runs in arrears – and facing the prospect of batting last on this traditional Galle surface.

While Root had dominated proceedings throughout his 19th Test century, battling cramp in his troublesome lower back and finding allies in the shape of Jos Buttler (55) and Dom Bess (32), Sri Lanka’s Lasith Embuldeniya was equally a standout. On the ground where Rangana Herath used to dominate the slow left-armer finished with figures of seven for 132 from 41 overs, the best return of his fledgling career to date.

When Embuldeniya removed Jonny Bairstow and Dan Lawrence in quick succession during the morning session it felt like Root’s final tally could easily end up sticking out from the scorecard like Sigiriya, the 200m high rock that sits on the otherwise flat plains near Dambulla in the heart of Sri Lanka.

Bairstow had held firm the previous evening when he and Root steered England to 98 for two after the loss of both openers. But with the ever-chirping Niroshan Dickwella behind the stumps informing the Yorkshireman he had been dropped for England’s tour of India, rather than rested, he slightly played across one from Embuldeniya on 28 and an inside edge popped up off his pad to second slip.

After this stand of 111 was broken, Lawrence became the fourth-right hander undone by Embuldeniya’s angle from around the wicket, drawn in by the drift only to be beaten by the spin as a slightly crooked defence offered an edge to first slip. Suddenly England were 132 for four and still trailing by 249 runs.

Root, who had begun the day on 67, was playing masterfully at the other end at least, picking up length early and sweeping hard as usual. One scorching switch-hit could easily have been played by Kevin Pietersen, who, along with David Gower, was passed by Root as he moved up to fourth in England’s all-time Test run-scoring charts.

Embuldeniya aside, Sri Lanka’s attack was tidy but unthreatening and Root enjoyed a relative cruise to three figures in only 139 balls, raising the bat to his teammates on the pavilion balcony and the solitary England supporter on the fort.

This was the first time Root has made centuries in successive Tests and over the course of the day it went from a display of stylish batsmanship to sheer bloody-mindedness as the fatigue took hold, his 150 coming up 118 balls later when a sweetly-swept four broke a streak of 25 runs from singles.

Buttler also looked in fine early touch during a fifth-wicket stand of 97 with Root, slotting a couple of crisp cover drives for four and unfurling his own array of sweeps, orthodox and reverse. The latter proved his undoing after lunch, however, when a bottom edge off the bowling of debutant Ramesh Mendis flew off his boot to short leg.

Umpire Kumar Dharmasena, who had earlier been confused by a similar incident that saw Buttler saved on review, initially called for Sri Lanka’s elated fielders to calm down before sending the decision upstairs himself with a soft signal of not out.

The initial replays suggested the ball had indeed come flush off Buttler’s footwear and though a side-on view cast an element of doubt – possible contact with the pitch that could also have been an optical illusion from the cameras – the third umpire, Lyndon Hannibal, felt he had enough conclusive evidence to grant Mendis a maiden Test wicket.

When Sam Curran fell on the stroke of tea after one mighty six, Embuldeniya completing his third five-wicket haul in nine Test appearances by teasing an edge to slip, England sat 256 for six and needed a tailender to stick in with Root during the evening session.

Bess stepped up, surviving 95 balls in an 81-run alliance that included some impish attacking strokes from the No 8. At the other end his captain was beginning to flag, devouring energy gels and bananas, as well as receiving treatment for his back, while Sri Lanka’s players started to look heavy-legged also.

But when Embuldeniya finally found the edge of his bat, and Mark Wood rather gifted the left-armer his seventh attempting an unnecessary mow, it put a spring in their collective step that paved the way for Root’s eventual demise. Though there is plenty of work left to do, the hosts now fancy they can send England off to India disappointed. - Guardian

2 Budd Schulberg: The screenwriter who made Marlon Brando a star