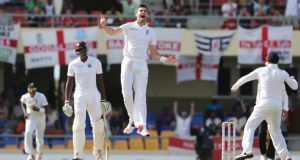 England’s James Anderson celebrates taking the wicket of West Indies’ Denesh Ramdin in the First Test in Antigua to break the record for the most Test wickets as an England player previously held by Ian Botham. Photograph: Jason O’Brien/Action Images via Reuters

It had been a long time coming and for a while, as West Indies batted defiantly through the second half of the final day in pursuit of a draw in the first Test, it appeared as if it might never arrive.

But at 10 minutes to four Jimmy Anderson, in his 21st over of the innings and the third of a new spell, with a genuine leg-cutter, fingers ripping down the side of the ball, found the outside edge of bat of West Indies’ captain, Denesh Ramdin, his own leader, Alastair Cook, dived to hold on to the catch to his left and the finest England pace bowler of his generation, in his 100th match, sat at the summit of Test match wicket-takers for his country.

As Anderson was mobbed by his team-mates, the crowd, to a man and woman, stood and applauded. In the stand his family, here in Antigua to celebrate what they hoped would be twin achievements, hugged, while in the television commentary box, Ian Botham, whose tally of 383 wickets Anderson had just overtaken, beamed and offered his own applause.

It was a pyrrhic victory of sorts, though, for if Anderson won his personal battle with the statistics of the game, England will consider that they lost a bigger one in the wider scheme of things.

Anderson’s wicket was the only success they had in the final 50 overs of the match, kept at bay by an impressively composed maiden Test century from Jason Holder, a landmark reached nervelessly in the penultimate over by twice belting James Tredwell’s off-spin over the top to the boundary, and half-centuries from Ramdin and, earlier, from Devon Smith.

If there had been more than a touch of recklessness about some of the early West Indian batting, for which Smith and Jermaine Blackwood, the two main culprits, apologised to the team, it is hard to fault the later diligence, a feather in the cap not just for the attitude of the players but for the new head coach, Phil Simmons, whose first match in charge this has been.

Certainly there have been times in recent years when few would have given West Indies a hope of batting through almost four and a half sessions as they did here; opposition teams could often sit back and wait for the implosion.

Cook called off his bowlers with two deliveries of the match remaining, with West Indies 350 for seven, never close to challenging the target of 434.

There was very little that England might have tried to break the deadlock, both in terms of field placements and bowling changes. In the end the pitch was the winner and, it must be hoped, not a sign of things to come in the remaining two matches. Early on in the game Viv Richards confided that he thought the surface needed grass leaving on to inject pace but also that it was not the kind of pitch to bang the ball in. Kiss the surface, he said.

In this regard England probably bowled consistently a little too short, a lesson they might absorb for the next match in Grenada. It was a task too far for Tredwell, whose first-innings role was admirably conducted, but who was found wanting second time round when a spinner might be expected to take advantage of wear and tear. One may expect to see more cutters bowled too. For the second Test there is little doubt that Moeen Ali, a considerably bigger spinner of the ball, will resume his all-round duties,

Anderson’s triumph has involved a long, arduous journey for him over almost a dozen years since he opened his account at Lord’s in his first new-ball spell for England by rearranging the stumps of the Zimbabwean opener Mark Vermeulen.

On the way he has suffered injury and at times despair. In mid-career he lost his place. The years, too, have taken their toll; the exuberant young man who hooped the ball around so enthusiastically has given way to a bowler who looks at times as if he carries the world on the same shoulders that have carried the bowling attack so worthily. His pace has dropped now, as inevitably it must from someone who has sent down more deliveries for his country than anyone else, but he still has craft with the ability to manipulate the ball and, at his very best, bend it this way or that to his bidding.

Perhaps it was inevitable that it was Anderson who stood up at a time when England needed him most for Ramdin and the beanpole paceman Holder were making life difficult, frustrating the drive for a victory that had almost seemed certain from the moment Chris Jordan removed the first-innings centurion, Blackwood, an hour before tea to reduce West Indies to 189 for six with the second new ball due at the end of that over.

Antigua has seen England deprived before when, six years ago, the game had been moved to the Antigua Recreation Ground. The last pair of Daren Powell and Fidel Edwards batted through the last 10 overs to deny them. But instead of simply blowing away the lower order, the new ball started to beat a relentless tattoo on the middle of the bat. Instead of spitting from a deteriorating last-day pitch, a cricketing law of diminishing returns applied, for the harder the pacemen bowled it, the more sluggishly it crept off.

For Tredwell, whose four wickets in the first innings had led to hopes that he might play a significant role in the second, there was scant turn, if any, and he rarely challenged the outside edge with his drift on the crosswind. Instead it was Joe Root whose off-spin proved the more pertinent as he added the key wicket of Shivnarine Chanderpaul to that in which Jordan plucked a rabbit from the hat the previous evening.

Together the seventh-wicket pair added 105, of which Ramdin made 57, with Holder already securing his second Test half-century before going on to a hundred.