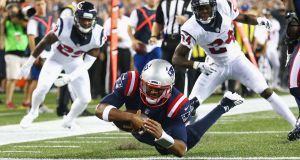 It did not look much like Tom Brady’s version of the New England Patriots, but when Jacoby Brissett rolled over the right tackle on a bootleg and sprinted for the end zone in the first quarter of Thursday night’s game against the Houston Texans, he made quite a statement about his readiness for the NFL.

Brissett’s 27-yard touchdown run, which included breaking through Andre Hal’s tackle attempt and evading a diving attempt by Jonathan Joseph, helped New England get off to a 10-0 lead in the opening quarter. The Patriots’ defence and special teams did the rest of the hard work, as New England chugged along to a 27-0 victory and improved to 3-0.

There was plenty of fear among Patriots fans heading into the game that Brissett, a rookie drafted in the third round out of North Carolina State, would be out of his depth, but New England had simply run out of options with Brady suspended for the first four weeks of the season and Jimmy Garoppolo, who played well in two starts, out with an injured throwing shoulder.

The cupboard was bare to the point that Julian Edelman, a wide receiver who has only thrown one pass in a game since college, was pressed into service as a back-up quarterback.

Coach Bill Belichick, known for his reserve, called the game a satisfying win at his post-game news conference and praised Brissett’s approach.

“He handled himself great last week, this week, all week, every day,” Belichick said. “He’s done nothing but come in here and work as hard as he possibly can.”

Brissett, the first Patriots rookie to start at quarterback since Drew Bledsoe in 1993, was not perfect, with many of his longer passes widely missing their marks, but the team relied on its veteran receivers to work with short passes and get their yardage after the catch while relying on a steady diet of LeGarrette Blount runs to grind the Texans into submission.

Even the 275-pound tight end Martellus Bennett ran a reverse as New England attempted to take pressure off Brissett with a game plan that seemed more suited to college than the NFL.

The strategy worked, with Brissett avoiding costly mistakes and adding a unique dimension to a Patriots attack that has traditionally sprouted squarely out of the pocket. His touchdown run was the longest by a Patriots quarterback since Steve Grogan lumbered for a 41-yard score against the Jets in 1976. Brissett finished the day having run the ball eight times for 48 yards.

After the touchdown, there was an amusing moment when Brissett handed the ball to Belichick, with some speculating that he had given his coach the ball from his first career touchdown, but Belichick said that was not the case. “I was just holding the ball for him,” Belichick said. “That’s his ball.”

Brissett was effective enough with his arm, completing 11 of 19 passes for 103 yards, balanced by a 105-yard, two-touchdown rushing performance by Blount.

The win was made far easier by New England’s special teams, which forced turnovers on two kickoffs and repeatedly pinned Houston deep with long punts. The Patriots defence was just as stellar, making Brock Osweiler, the Texans’ young quarterback, seem far less capable of running an offense than Brissett. Osweiler completed 24 of 41 passes for 196 yards and threw one interception.

Houston did not run a play in the Patriots’ territory until the last two minutes of the third quarter and never even came close to scoring.

The Patriots now have 10 days to prepare for a week four match-up against the Buffalo Bills and will get Brady back in week five against Cleveland.

It is still unclear whether Brissett or Garoppolo will start at quarterback in the last Brady-less game, but with a 3-1 start to the season being the worst-case scenario in Brady’s absence, most of the pressure is off and the suspension of the team’s star, which once seemed so crippling to New England, will begin to fade into a footnote.