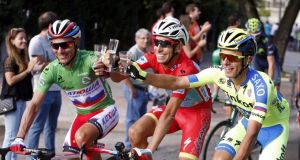 Italian cyclist Fabio Aru (C) of Astana, makes a toast with Spanish rider Joaquim Rodriguez (left) of Katusha and Polish rider Rafal Majka of Tinkoff-Saxo at the start of the 21st and last stage of the Vuelta a Espana, won by Aru. Photograph: Javier Lizon/EPA

Italian Fabio Aru wrapped up a debut grand tour triumph when the beaming Astana rider coasted over the line on the final day’s ceremonial ride into Madrid to win the 70th edition of the Vuelta a Espana on Sunday.

The 25-year-old from Sardinia went one better than his second-placed finish behind his idol Alberto Contador at this year’s Giro d’Italia to confirm his status as one of the hottest young riders in the sport.

He is the youngest winner of the Vuelta since Melchor Mauri won in 1991.

Aru was not even Astana’s leader when the three-week race began but moved into contention after compatriot Vincenzo Nibali, the 2014 Tour de France champion who won the Vuelta in 2010, was disqualified for hanging onto the Astana team car after a crash on the second stage.

Aru’s chances were further boosted on the 11th stage when Chris Froome’s bid for a rare Tour-Vuelta double was ended by a heavy fall that left the British Team Sky leader with a fractured bone in his foot and forced his withdrawal.

Dutchman Tom Dumoulin was the surprise leader by six seconds over Aru heading into Saturday’s decisive penultimate stage after a scorching performance in Wednesday’s time trial.

But Aru and his Astana colleagues wrecked the Giant-Alpecin’s rider’s chances of a podium finish when they left him flailing on the third of four ascents and he dropped down to sixth overall as Aru grabbed the leader’s red jersey.

“This is not just a triumph for Fabio Aru, this is about the victory of a team,” Astana director Alexander Vinokourov said.

“On paper it seems easy but the reality is that it was very tough,” added the 2006 Tour of Spain winner.

Aru said after Saturday’s stage he would like to ride the 2016 Tour de France but first would meet with Astana to decide on the year’s objectives.

“Vincenzo (Nibali) is a great rider, he’s won grand tours, so in our team it’s not a question of being a leader or not being a leader,” Aru said.

“Vincenzo was in the team here, but he had to leave in the second stage. But if he had been in the race, we’d both have raced to get a top result because we’re both professionals.”