Shifty winds hamper progress off the coast of France 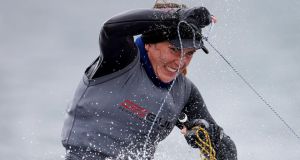 With 470 days to go to Rio, all three campaigns plus the Paralympic crew fared poorly in a fickle 10-knot breeze during Wednesday’s first races with some overall improvements on Thursday.

Admittedly, competition is at its fiercest across all 12 fleets in Hyeres because under new rules entry is limited to the top-40 sailors in each class, meaning an ISAF World Cup invitation is achievement in itself.

Dun Laoghaire’s Annalise Murphy, who finished fourth at the London Olympics and who has already qualified for Rio bounced back on Thursday afternoon with a fifth in race four but, after two days and four races sailed, the Laser Radial sailor from the National Yacht Club (NYC) occupies an untypical 34th place this morning (FRI), up five places from 39th on Wednesday.

Racing in the 49er skiff was full of ups and downs as the fleet battled the shifty breeze and Ryan Seaton and Matt McGovern from Belfast – also through to Rio – found themselves short of last year’s silver medal form to be 31st after four races sailed.

It’s still early days but it looks like this cup format has been given a thumbs up by many of the 600 sailors in 400 boats who say it’s format is closer to the Olympic regatta with some maintaining it’s standard is higher than the Games.

The flukey conditions thus far are mirroring those widely expected for Rio so the dinghy park suggestion that ISAF has already produced a good indicator about who will be in the medal shake up next year may not be too wide of the mark.

While ISAF likes to promote the idea that everyone campaigning for Rio is racing this week, that’s not the case, in an Irish context at least. Neither of the Irish mens Laser dinghy campaigns made the cut but Ireland has secured country qualification in this class (thanks to the efforts of James Espey) and will be on the Rio start line.

In a big turnout of RS dinghies for the Eastern Championships at the Royal Irish Yacht Club last weekend Ballyholme’s Gareth Flanagan and David Fletcher were winners of the RS400 division. Winners of the RS200 were Marty O’Leary and Rachel Williamson of the Royal St George YC. Feva winners Tom and Henry Higgins.