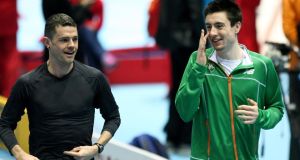 Ireland’s David McCarthy and Mark English get a feel for the track at the Ergo Arena. Photograph: Adam Jastrzebowski/Inpho

Mark English fell victim to some truly ruthless qualifying races at this morning’s opening session at the World Indoor Athletics Championships in Sopot, Poland – and he wasn’t the only one.

The 20 year-old did everything possible to put himself in contention to qualify from the third of three heats of the 800 metres, where only the winner was sure to progress to Sunday’s final. Sitting in second at halfway, English emptied the tank all the way to the finish, where he ended up fourth, clocking 1:47.60.

For English, 1:47.60 wasn’t quite good enough, although the effort was faultless. Instead, the other two qualifying positions as fastest losers went to the Dutch runner Thijmen Kupers with his 1:46.55, and the other Polish runner, Marcin Lewandowski, with his 1:46.26.

Both Irish representatives in the women’s 800m – Rose-Anne Galligan and Ciara Everard – found the going ever harder. Galligan, running in the first heat, finished sixth of six, running a season best of 2:03.30, and even though she was later promoted to fifth due to the disqualification of the Icelandic runner, Aníta Hinriksdóttir, that was never going to see her through.

Likewise with Everard, who also ran a season best of 2:03.69, but again had to be content with finishing sixth out of six – and with a long way of qualifying.

David McCarthy, going in the third of three heats of the 1,500m, did come within one place of qualifying for the final. In what turned out to be the fastest of the three heats, won by the Ethiopian Aman Wote in 3:36.75, McCarthy finished sixth, his 3:39.46 just outside his indoor lifetime best of 3:39.14, set last month.

But McCarthy always needed to finish fifth or better to qualify – as only the top two from each heat, plus the three fastest losers, progressed. So, while all five runners who finished ahead of him made it through, McCarthy was left to wonder what might have been had he got past fifth-placed Ilham Tanui Özbilen from Turkey, who ran 3:39.31.