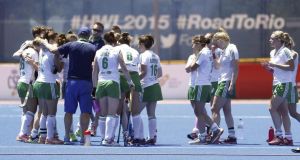 A dejected Ireland team after their World League quarter-final defeat to China on Thursday. Photograph: Epa

After the utter devastation of a shoot-out loss to China in what was a direct Olympic qualifier, Darren Smith has the unenviable task of picking up his players to go again for another huge match on Saturday in Valencia.

He saw his side spurn 15 penalty corner chances against the world number seven side - Ireland are 14th - in their World League Round 3 quarter-final before losing 4-3 in the seventh round of a sudden death shoot-out.

It continues a horrible of near misses for Irish hockey as they bid to finally qualify for the Games. Four years ago, Korea did for the men’s hopes with seven seconds left on the clock. This one went a step further, the shoot-out denying Ireland a certain place at the 2016 Games though there is still a repechage of sorts.

To add to the heartache, Megan Frazer had a potential winning goal first awarded with five minutes remaining only for an umpire’s video referral to overturn the decision.

That the referral occurred after the Chinese players swarmed around umpire Elena Eskina who initially showed little inclination to review the decision further rankled.

Coach Smith felt the right decision was reached but the process was not all it could have been: “In the end, they got it right, so you can’t get too disappointed. It looked like a Chinese referral when they had lost theirs already but that’s the way it goes.”

Early on, nerves looked a real factor, especially in the number of mistraps and decision-making errors on show - a rarity in the previous games that had seen Ireland top their group.

They certainly played a key factor in China’s first goal as two players missed an overhead ball, allowing Zhang Xiaoxue to race through unattended and slip home for a fifth minute lead.

Ireland replied by running up corner after corner with Katie Mullan’s bash the pick of the chances from play. Eventually, the pressure paid off 12 minutes into the second half as, with China suffering a sin-binning, Kate Dillon powered forward before slipping the ball to Chloe Watkins who swept in from close range.

More corners came and went while China had fleeting moments in attack, using their speed to cause panicked moments.

The shoot-out loomed and while Ayeisha McFerran made a trio of great stops, China’s Li Dongxiao did likewise, keeping the contest level after six rounds.

It denies Ireland their best chance of qualifying for the Olympic Games though there is still some life in the tournament with a fifth place finish in this event potentially offering a ticket to Rio in 2016.

As such, Smith must now find a method to motivate his players after this heartache.

“All you want is that ticket to Rio and we put our heart and soul into that match,” he said. “We could have been more clinical from our penalty corners. They defended them pretty well but it was a tight and tough match.”

Looking to the classification matches, he added: “We need to make sure we are determined and focused, defend well and tackle well and get into that fifth/sixth place playoff and give ourselves a chance of going to Rio. It might be a little bit of hurt for the next while but we hope that clears and we get the girls back into it.”