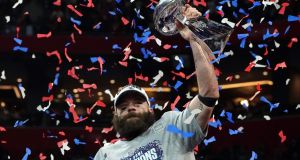 Never have the New England Patriots been so doubted. A creaking 41-year-old quarterback. A Hall of Fame tight end on his last legs. A slow defence. Julian Edelman, Tom Brady’s favourite weapon, coming off an ACL injury and a doping suspension. Five road losses.

It wasn’t the prettiest, but Super Bowl LIII may well have been Bill Belichick’s best coaching job to date. Seventeen years to the day that Belichick and the Patriots beat the Los Angeles Rams to kickstart their dynasty, they clinched their sixth title – putting them ahead of Landry’s Cowboys, Noll’s Steelers and Lombardi’s Packers as the greatest team in the history of the sport.

Belichick is now unassailable as the best coach in NFL history, although, in truth, his legacy was secure prior to the teams taking the field in Atlanta. Sunday was a masterclass in Belichick football. It was a defensive slugfest, with the Pats coach hellbent on taking away what the Rams do best: their run-game was non-existent; Todd Gurley, such a star early in the season, vanished.

Sean McVay’s fun-and-gun offence became plodding and predictable, and the Patriots held the Rams to a measly three points and fewer than 300 yards. Belichick frazzled Jared Goff with an array of coverages and blitzes that the young quarterback could never quite figure out. Once an MVP candidate, Goff appeared lost and overawed at the prospect of matching wits with Belichick.

Belichick cherry-picked some of the most effective tactics other teams have used against the Rams this season, mirroring the Lions and Bears in disrupting the rhythm of McVay’s offence. The Rams started out 0-7 on third downs and could never quite figure out the Patriots’ defence. Who was bringing pressure? And from where? They never did find the answer.

The Patriots have fielded much better teams in their near two-decade run of dominance, and it’s to Belichick and his coaching staff’s immense credit that they have squeezed every bit of juice out of a less-than-impressive roster this season. The Patriots may have started the year as preseason favourites, but struggles against teams outside their weak division had many, this writer included, talking about the end of the Belichick-Brady axis. But they always seem to find a way, and Belichick had been preparing for Sunday since the team’s mid-season bye.

The Patriots doubled down on an old-school, power-running style. The results weren’t particularly impressive down the stretch, but the shift was built for postseason football.

Belichick wanted to drag the league’s high-scoring offences that had been the toast of the league down into the mud. He knew he didn’t have the artillery to go toe-to-toe with an offensive juggernaut, that he must win with his defence in December and January. So, he played old-school football in the new-age league. Did it ever work. He crafted the third-heaviest roster in the NFL and played bully ball against the Chargers and Chiefs en route to the Super Bowl.

Finally we kind of broke through in the fourth quarter. We kind of needed that

The slow, pound-the-rock style came through big when the team needed it most on Sunday. They couldn’t get anything going in the first half, but running the ball directly at the best defensive line in football had a sapping effect on the Rams’ pass-rush. Wade Phillips’s unit held up admirably throughout the game, flying to the ball and harrying Brady in the pocket. A lot of his passes were a hair off – too low or a bit behind. But the dam broke in the fourth quarter, just as it did in the Patriots’ last Super Bowl win over Atlanta.

“Yeah, it was tough,” Brady said of going into halftime with a 3-0 lead. “We just couldn’t make the big play, we just couldn’t stay on the field on third down. We just knew we had a whole half to go – defence set the tone. They held them, we got some good field position for them. They held them and finally we kind of broke through in the fourth quarter. We kind of needed that.”

The Rams tired. Brady had an extra couple of beats to survey the field and find the match-ups he liked. Over and over again he went to his most trusted targets. Edelman finished the game with more than 140 yards receiving and the Super Bowl MVP trophy, and Rob Gronkowski hauled in the throw of the night, setting up the game’s only touchdown.

Everybody counted us out from the beginning of the season

Belichick and offensive co-ordinator Josh McDaniels made a decisive adjustment: throwing out of the run-based formations they had been setting up throughout the final third of the season. The Rams had no response.

It would be naive to paint the victory solely as a Belichick-Brady masterpiece. The Patriots made a bunch of uncharacteristic mistakes early in the game: Brady threw an early interception on a poor throw; he fumbled; the Patriots blew defensive coverages that Goff never saw or missed. Were it not for a spectacular, freelanced Jason McCourty play, we may be talking about the dawn of a new dynasty right now.

McVay, Goff and the Rams will have their day. But this is Belichick’s era. Other squads may get headline billing when it comes to Patriots legacy talk. But you sensed after the game that this victory will be Belichick’s most satisfying. “Everybody counted us out from the beginning of the season,” Belichick said post game. His defensive gameplan from Super Bowl XXV is already in the Hall of Fame. It’s time to open up space for another one.