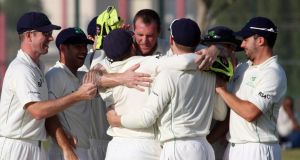 Ireland created its own piece of cricketing history in Dubai on Friday as they became the first international team to win three trophies in a calendar year by beating Afghanistan by 122 runs to win a fourth Intercontinental Cup Final.

Added to the World Twenty20 Qualifier title they secured with victory over the same opposition in Abu Dhabi recently and the World Cricket League title, it rubber stamps yet again the superiority Ireland enjoys at Associate level in the world game.

Trent Johnston was sent up by skipper William Porterfield to collect the trophy, his fourth time to do so, and despite the searing Achilles pain that kept him off the field on his final day as an Ireland player, his was a wide smile of satisfaction at the end of a stellar 198-cap international career.

The 39-year-old would have been delighted also that the man that saw Ireland home in the end was John Mooney, a long-time understudy of Johnston’s, with the North County all-rounder completing a brilliant match by claiming his 10th wicket as Afghanistan were bowled out for 224 during the afternoon session on day four.

It was an incredible performance from Mooney, taking 10 for 81 on a pitch that never really deteriorated and in baking desert conditions also.

The new ball did the trick in the end after Afghanistan dug in during the first session with skipper Mohammad Nabi and the outstanding 20-year-old Rahmat Shah grinding out 53 runs in 34 overs to move their score to 189 for five. That still left them 158 runs short of victory, but with a long batting line-up, they were still in the match with four sessions to play.

Max Sorensen made the key breakthrough in his second over with the new ball when he trapped Nabi leg-before for 49, which came off 174 balls.

With Shah showing concentration way beyond his years, Ireland targeted the other end and it was Mooney that made hay, claiming the last four wickets in 19 deliveries to leave Shah stranded on 86 not out as Afghanistan were bowled out for 224.

Ireland coach Phil Simmons praised his side for their efforts in winning a 10th trophy during his six and a half years in charge, a remarkable return for the West Indian who has recently extended his contract until the summer of 2015.

“It’s unbelievable, I think this year has been the best year, in that the quality of cricket played ended in winning three trophies, which is just marvellous,” said Simmons. “The guys have been working really hard and it’s nice at the end of the day to win something to show for your hard work.”

With Johnston hors de combat and Tim Murtagh having had to travel home before the match for personal reasons, Mooney’s performance was picked out for special merit by the coach.

“John Mooney has been here for so many years and gets his first 10-for and no better time to get it than now. I’m glad that he’s stepped up and shown that when Trent goes he’s the lead all-rounder here,” added Simmons.

It’s been a tough couple of years for Mooney with injury, but the 31-year-old all-rounder never lost hope of delivering again for his country on the international stage

“Yeah, brilliant. It has been a couple of years there, a couple of broken fingers and hamstring tears and stuff like that you know, but I knew myself that something like this would come along, I always had the belief,” he said.

With Kevin O’Brien being announced as the ICC Associate Player of the Year during the awards ceremony and with $100,000 banked as winners to go with the $250,000 picked up from the T20 qualifier success, it has been a year of huge achievement for Ireland.

With a World T20 and 50-over World Cup in the next two years this golden age for the game in this country is set to motor on, even if Johnston, the man who kick-started it on the field with his talent and force of personality, will be watching on from comfy seats.

A Stanikzai b Dockrell 2

A Zazai lbw b Dockrell 0

I Dawlatzai c Joyce b Mooney 0

Man of the match: John Mooney.