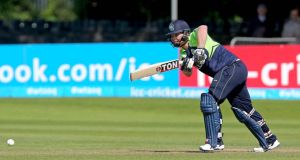 Ireland’s ability to make the least of home advantage in qualifying tournaments seems to be striking again after a two-wicket loss to Hong Kong in Malahide made it two defeats in a row in the World Twenty20 qualifier following 21 straight wins before Wednesday’s defeat to PNG.

PNG now lead Group A on seven points and with a game in hand over Ireland ahead of the final games over the weekend - Ireland play Jersey on Sunday in Malahide (10am) - and look set to take the automatic place at next year’s World Twenty20 allotted to group winners.

That would leave Ireland to look for one of the four remaining slots on offer through next week’s play-offs, but with Group B containing the likes of Afghanistan and Scotland that could prove a tough task for a misfiring side.

Ireland skipper William Porterfield has laid the blame at the feet of his batsmen, including himself, after they failed to chase down a victory target of 140 against Hong Kong despite a promising start.

“I think we haven’t adapted to our own conditions,” said Porterfield, whose 29 came from 40 balls. “It sounds a bit stupid, but we haven’t, the pitches have been slow and low and people have bowled straight on them. We’ve bowled very well as a unit, but with the bat we just haven’t adapted at all.”

Ireland had looked well on course to chase down the target after Paul Stirling hit 20 runs off the sixth over but his departure for 34 off 26 balls saw wickets fall regularly to some fine bowling by Hong Kong. Needing 23 from the last over, John Mooney had a go, hitting two fours and a six, but it was all too late to change the outcome.