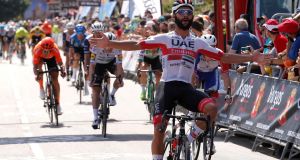 Colombian riders Sebastian Molano, Cristian Munoz and Camilo Ardila were withdrawn from the Vuelta a Burgos after coming into contact with an individual who tested positive for Covid-19, the UAE Team Emirates team said on Wednesday.

The trio completed the first stage on Tuesday but are not participating in the second stage which started in Castrojeriz.

“The three Colombian athletes on Saturday had been in recent contact with a person who turned out to be positive for Covid-19,” the team said in a statement.

“Following the protocol of the team and the UCI, the three riders were isolated, sent home and will all undergo another test. All three riders returned two negative tests in the days prior to the race.”

UAE Team Emirates did not name the person who tested positive.

The team still had reason to cheer though as Fernando Gaviria stepped up inside the final kilometre to overtake Arnaud Demare of Groupama-FDJ and Deceuninck-QuickStep’s Sam Bennett to lead the sprint to the finish line and win the second stage.

Gaviria, who had himself tested positive for Covid-19 at the ill-fated UAE Tour in February, said it was one of the “sweetest tasting victories” this year after the cycling season resumed following a four-month hiatus due to the pandemic.

“We didn’t do any work to control the breakaway because we were three riders down,” Gaviria said. “It was a blow for us not having Molano who is one of my lead-out men.

“But still we were able to count on legs and luck, and at the right moment we came together to do a good sprint and get the win.”

On Tuesday, Team Israel Start-Up Nation withdrew two riders – Alex Dowsett and Itamar Einhorn – before the start of the race due to coronavirus concerns.

Einhorn had come in contact with team mate Omer Goldstein, who is not competing in Burgos but returned a positive test this week. The team later said Einhorn’s test had come back negative.