Ireland out to banish negative omens in Oman opener 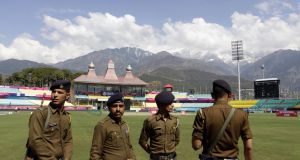 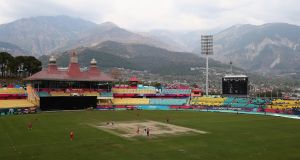 A general view of the HPCA Stadium during the Twenty20 World Cup warm-up match between Ireland and Zimbabwe in Dharamsala, India. Photograph: Getty Images

Ireland will be looking to put some decidedly shaky form behind them over the next five days in India in a bid to make it past the first round of the World Twenty20 for the first time since 2009.

They will need to beat Oman, Bangladesh and the Netherlands in the stunning surroundings of Dharamsala to achieve that goal and join hosts India, Pakistan, Australia and New Zealand in the Super 10 stages of the competition.

In truth, Ireland have never excelled in the shortest form of the game, with the the 50-over version and the attempt to obtain Test cricket status given priority when it comes to time and resources.

The fact that Ireland have not played a single T20 international against a major nation in the two years since the last World Twenty20 highlights the issue, hindering the development of specialist skills involved in the format.

Having settled into his role, new coach John Bracewell has changed things around somewhat in a bid to help Ireland’s batsmen develop the kind of power-hitting required to put teams away in T20.

“We changed our physical programme a little bit more, targeting power-hitting and making sure guys are in the right positions. They get confidence to strike the ball harder,” said Bracewell in the build-up to today’s opening game against surprise qualifiers Oman.

The gulf nation took the final spot in the tournament when they beat Namibia in Malahide during last July’s qualifier event.

Ireland were less than impressive in that event, losing group games to Papua New Guinea and Hong Kong before being beaten in the semi-finals by the Netherlands.

It was the second straight win for the Dutch between the sides after they ended Ireland’s hopes of making the second stages of the competition in Bangladesh in 2014, chasing down a victory target of 190 in less that 14 overs to go through on run rate.

Ireland will again meet the Dutch in their final first-round match on Sunday, although their hopes of qualifying could end on Friday against an in-form Bangladesh side fresh from making the final of the Asia Cup.

Ireland skipper William Porterfield is looking no further than an Oman side that were buoyed by beating Scotland in a warm-up game.

“They played some good cricket in the Asia Cup scoring a few runs, and they’ve beaten Scotland out here in the warm-ups so we’re certainly not under-estimating them , they’ll be in good spirits,” said Porterfield.

“We’ve done our homework on them watching a lot of footage and seeing how they go about things so we’ll be ready for them.

“We’re going to have to be at the top of our game tomorrow to put them under pressure and collect two points. We’ve done a lot of good things over the past while so we’ve just got to make sure we take that into the game and enjoy the whole occasion.”

Porterfield’s bowling options has been boosted by the return of his good friend Boyd Rankin from his dalliance with England, while Tim Murtagh’s decision to come out of T20 retirement strengthens Ireland’s attack.

John Mooney’s retirement deprives Ireland of an experienced all-rounder, with Stuart Thompson yet to deliver on his promise on the international stage.

Andrew McBrine has put his hand up to fill Mooney’s position and also nudged ahead of George Dockrell as Ireland’s first-choice spinner. Both may start against Oman, with one of the key decisions for Bracewell and Porterfield being who will take the No 3 slot in the batting order following the retirement of Ed Joyce from T20 cricket. Gary Wilson top-scored with 38 when filling the role in the defeat to Zimbabwe in the final warm-up game.

One thing Wilson and the rest of Ireland’s batsmen will be aware of is the likelihood of Oman attempting to run-out the non-striking batsmen while he’s backing up – an act known as a mankad that is within the laws if not the spirit of cricket.

Asked if Ireland would utilise the method of dismissal, Porterfield said: “That is not something that we will be doing. “To each their own, I guess. If they feel it is a genuine way of taking a wicket, it is up to them, how they want to play the game.”

The venue: The Himachal Pradesh Cricket Association Stadium might not sound that enticing, but any list of the most beautiful cricket grounds in the world will always include this stunning jewel set against the backdrop of the snow-capped Dauladhar hill-range, part ot the Outer Himalayan chain. The 23,000-capacity ground is situated almost 4,500 feet above sea level, the thinner air helping the ball travel further. It has only held one T20 international before, a high-scoring affair last October where South Africa chased down a target of 200 with two balls to spare.

On TV: All games live on Sky Sports 2