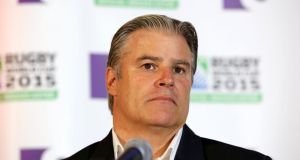 World Rugby chief executive Brett Gosper: “You can’t say at this point who is favourite or not favourite.” Photograph: Dan Sheridan/Inpho.

Ireland will face fierce competition from other countries to host the Rugby World Cup in 2023. The IRFU, with the backing of politicians north and south, have been the most vocal in declaring their candidature for the 2023 event but World Rugby chief executive Brett Gosper says that other countries, including South Africa, USA and France, are said to be interested in staging the biggest world rugby event. The official bidding process has not yet begun.

“They [other interested countries] haven’t been as public as Ireland,” said Gosper. “We’re getting some signs from some other nations like South Africa. We heard the USA may throw a bid in too.

“We heard some rumours about a French bid so they are a bit more at the rumour stage as having a government publicly announce support.

“But that will come very quickly. That process hasn’t begun so we are excited about a number of very strong candidates that are showing interest.

“There will be, we think, quite a broad group and quite ferocious competition for Ireland,” added Gosper. “I think Ireland will be a terrific candidate but ultimately it will be voted for by a committee, the council. I guess, it having been to Japan recently, the likelihood is it would probably come back into this time zone like London and so on . . . you can’t say at this point who is favourite or not favourite.”

Gosper added that Ireland would also be a strong candidate to host the Women’s Rugby World Cup. However, he could not comment as an official bid has not yet been received by World Rugby, although they have heard that Ireland may be interested.

Gosper expects this year’s event to break all previous records in terms of numbers watching on both television, social media and in the stadia.

“I think the big change is the scale of this World Cup compared to other World Cups. Potential audience we’re aiming for is 2.3 million in stadia,” he said. “The economic activity generated will be just over £2 billion for the UK.”

“What’s interesting is also there will be records broken in broadcast numbers in social media numbers and so on, so the scale of it is huge and this will be the biggest World Cup for sure.”