Pathway to senior team is open to players who perform 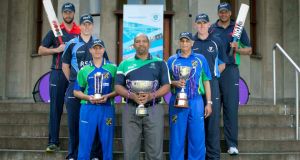 Ireland coach Phil Simmons has told players “don’t fear failure and don’t die wondering” ahead of the start of the revamped RSA Inter-Provincial Series next week.

Leinster Lightning and Northern Knights get the ball rolling with a 50-over clash at The Hills in Skerries on Bank Holiday Monday and Simmons will be casting a keen eye on proceedings ahead of a busy summer of international cricket.

Speaking at the launch at College Park in Dublin, Simmons said: “This is the perfect platform for all cricketers, young and old, to show the selectors exactly what they are capable of. We expect these games to be highly competitive, and will be looking for strong performances from all three teams.

“We’re looking for qualities and technique that prove that guys have what it takes to perform at a higher level and in the international arena. The beauty of this series of games is that it gives players a chance across three different formats.”

Leinster have named a 12-man squad for the opener, including nine full internationals. Middlesex’s Andrew Balbirnie is available to player/coach Trent Johnston and skipper Kevin O’Brien for the encounter, while the all-rounder slot made available due to John Mooney’s suspension looks set to filled by either his North County team-mate Eddie Richardson or Merrion 18-year-old Tyrone Kane.

The Northern Knights have cut their squad down to 13 for the game, with another exciting teenage talent in CSNI’s Mark Adair in line for a start.

Andrew White will captain the side, which also has a player/coach in his Instonians’ team-mate Eugene Moleon.