Ian O’Riordan: Time for sport to ease up on cannabis ban

While not performance-enhancing, Wada believes it violates the ‘spirit of sport’ 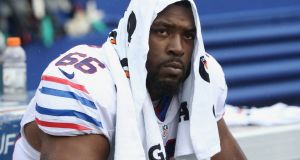 It used to be every athlete’s worst nightmare. Trust me. A Christmas party, an end-of-season awards night, a gold medal celebration, something like that. Rainy Day Women is played over the sound system and suddenly someone is saying everybody must get stoned . . .

Then they wake up, the following morning and think: “What have I done?” Or rather: “What if I’m drug-tested?” That fear hasn’t necessarily gone away.

The last thing anyone should be campaigning for right now is for a substance to be taken off the banned list or even gently encouraging it for therapeutic use exemption. But of all the questions directed at the World Anti-Doping Agency (Wada) these days – and there are many – why do they still have cannabis on the banned list?

This question is obviously topical as it is in part related to the Government’s decision this week to facilitate a cannabis Bill put forward by People Before Profit TD Gino Kenny. While still some distance short of legality, this has at least opened up the wider debate about medicinal cannabis use. There is a similar debate right now surrounding its use in a sporting context.

The latest Wada code, effective from January 1st, is now in circulation. Still prominent on the prohibited list of in-competition substances are cannabinoid in its various forms: cannabis, hashish, marijuana, synthetic tetrahydrocannabinol (THC) and synthetic cannabimimetics, such as Spice.

By “in-competition” they mean the period commencing 12 hours before an event in which the athlete is scheduled to participate through to the end of such competition and the sample collection process.

This is actually less stringent than it used to be, because initially Wada were pretty strict on marijuana use, not because it considered it performance-enhancing, but because they felt it violated “the spirit of sport”.

The US Proceedings of the National Academy of Sciences (PNAS) carried out its study on mice, so it was impossible to prove how their sense of euphoria was influenced, but running on a wheel clearly increased their blood levels of cannabinoid (so they must have been feeling some sort of buzz).

Anyway, in 2013, Wada raised the threshold for a positive test for THC (one of the active ingredients in marijuana) from 15 nanograms per millilitre to 150ng/ml. This effectively means an athlete would need to be smoking a joint, or something similar, in or around the competition itself in order to test positive.

Still, there is the risk of the adverse analytical finding if, for whatever reason, that 150ng/ml is breached. At worst, this could result in a four-year ban; at best, an awkward admission of guilt and a gentle tut-tut from Wada.

That fear clearly endures, considering the three most searched items on the Wada list of prohibited substances are anabolic steroids, marijuana and cocaine. This suggests that many athletes, for whatever reason, are still worried about testing positive for either weed or coke. (MDMA is pretty high on the search list too.)

Central to the Dáil debate on medicinal cannabis use is the fear, or otherwise, that it would result in the normalisation of cannabis.

“The speed with which our legislators have taken to heart a proposal to legalise medicinal cannabis smacks of undue haste and a pandering to fashion,” wrote Paul Cullen in this newspaper on Thursday – and there may be some truth in that. “Once medicinal cannabis is legalised, it will become even harder to enforce the existing laws banning its use for recreational purposes. Is this really what we want?”

Fettner described the NFL’s decision as “heart-breaking”, partly because the NFL doesn’t allow an exemption for medicinal cannabis use.

Henderson was diagnosed with the inflammatory bowel disease in early 2015. It required two operations on his intestines last off-season. Doctors removed a section of diseased tissue in January of this year, and Henderson then had his intestines reattached in April.

There is at least some evidence that cannabis can be an effective treatment for Crohn’s. In New York, the state’s medical marijuana programme specifically lists patients diagnosed with inflammatory bowel disease as being potentially eligible to obtain medical marijuana.

There is also evidence within the NFL, not just anecdotal, that cannabis is playing an important therapeutic role in another sense. According to Jamal Anderson, who retired from the Atlanta Falcons last year, cannabis use within the NFL is at “at least 60 per cent now”, mostly because it helps players to deal with the “ramifications of head trauma”.

Contact sports on this side of the Atlantic, namely rugby, may not be at that level yet, although Minister for Health Simon Harris may want to take note as he looks for evidence to further the cannabis Bill beyond the second stage.

This is not about players or athletes getting stoned. Cannabis contains two chemical compounds of medical interest: THC, the psychoactive ingredient that leads to the “high” sought by recreational users, and cannabidiol (CBD), a non-psychoactive component valued for its therapeutic benefits. Most medicinal forms of cannabis are high in CBD and low in THC.

And in the NFL, at least, it seems players are simply reliant rather than addicted. “They’ll give you pain-killers by the bottle, which are far, far worse than cannabis,” said Fettner, following the ban on Henderson.

Is this really what we want?