August deal with the Sports Council worth €95,000 was withdrawn within days 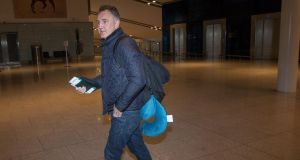 The IABA reneged on a six-part agreement with the Sports Council over Billy Walsh’s employment terms, according to documents seen by The Irish Times.

Walsh, who left for Colorado Springs on Thursday morning to take up a role with the US Olympic Committee, had agreed terms worth at least €95,000 annually plus bonuses at a meeting in August only to see it withdrawn within days.

The Memorandum of Agreement between the two bodies was drawn up in an attempt to see off the offer from USOC, which had been made six months previously. The offer from America is believed to be worth more than double that amount with provisions for a pension, health insurance and flights back to Ireland included.

However, Walsh was happy to sign up to what had been agreed, particularly since a clause in the document specifically referred to him leading the High Performance Unit of the IABA.

Though he had been the de facto leader of the HPU since Gary Keegan left after the Beijing Olympics, this was the first formalisation of his role and it conferred upon him the authority he had been seeking to run the programme. Subsequently, the IABA came back to the Sports Council and said it had chosen not to bring the agreement to board level.

The agreement is broken down into six sub-headings – salary, bonuses, reporting arrangements, expenses, IABA salary review and funding. On finance, the agreement makes clear that the Sports Council would provide the necessary funding for Walsh’s new salary through the annual grant arrangement for the IABA.

As far as bonuses were concerned, it was agreed that Walsh be paid €25,000 in 2015 in recognition of the medal/podium achievements at European Championships, European Games and World Series Boxing.

A further bonus was due to be paid in October 2016 to take into account podium/medal achievements in this year’s World Championships in Doha and next year’s Olympics in Rio de Janeiro, with further discussions to take place in November 2016 to review bonus arrangements for 2017.

While five of the clauses apply to the Walsh situation, the IABA salary review could be seen as an attempt by the Sports Council to begin shaking up the corporate governance of the IABA. The terms of the review were to be agreed with the IABA, and it was recommended that it be undertaken as soon as possible so that it could be implemented from January 1st, 2016.

All in all, the agreement meant a remuneration package for Walsh of €120,000 in 2015. Though the offer from the US was significantly higher and included ancillary benefits, Walsh was happy to sign up to it to stay in Ireland.

But somewhere between leaving their meeting on August 20th and IABA chief executive Fergal Curruth informing the Sports Council on Monday, August 24th that they would not be going ahead with it, amateur boxing’s governing body changed their minds.

Why they did so has not been made clear, as the IABA’s media silence continued on Thursday. IABA president Pat Ryan has told The Irish Times that they are aiming to hold a press conference on Friday to take questions on the matter.

“Some of the comments have been very, very ill-informed,” said Ryan. “What we want to do now, in a dignified matter, is put the record straight. That’s what will happen tomorrow. Everyone will get the opportunity to ask all the questions they feel obliged to ask and we will answer them all in a very orderly manner. Because there is another side to this story.”

Meanwhile, an intervention by Minister for Sport Michael Ring on Thursday may well have put him on a collision course with the Sports Council. Ring met with the IABA on Wednesday and in a subsequent interview with Newstalk radio, the Mayo TD appeared to pour cold water on Kieran Mulvey’s threat of a funding review for the IABA in the wake of the Walsh affair.

Asked if the IABA would face a funding cut over this, Ring shot down the notion immediately. “No, that will not happen,” he said. “And I can assure them [the IABA] that will not happen. I will not allow the grass roots of the sport to be affected in any way.”

Ring’s comments did not go down well in the Irish Sports Council, since they seemed to undermine Mulvey’s strong appearances this week, first on Prime Time on Tuesday night and subsequently in front of the Committee for Transport and Communications on Wednesday.

In a separate development, that committee has agreed to call the IABA to appear before it in the coming weeks to explain its side of the story.