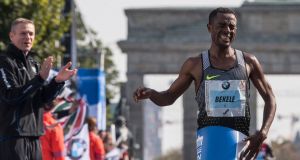 Questions have been raised about whether Ethiopian Kenenisa Bekele used springs in his shoes at the recent Dubai marathon. Photograph: John MacDougall/AFP/Getty

The IAAF is to beef up its investigations into the next generation of marathon shoes, amid concerns some may contain illegal springs.

The potential intervention by athletics’ governing body came on the day Nike revealed the design of its new Zoom Vaporfly Elite shoe, to be used by athletes attempting to break two hours for the marathon, will contain a special carbon fibre plate in its sole.

A spokesman for Nike said the shoe, which the company believes makes runners 4 per cent more efficient compared to its previous fastest marathon trainer, adheres to the specifications of the International Association of Athletics Federations. When the IAAF were contacted and asked whether Nike’s carbon fibre plate was legal, a spokesman said they were interested in the technical advances but wanted to make sure the shoes – and shoes from other manufacturers – conformed to its rules.

“We are aware of the speculation around the shoe and have received inquiries about new designs of shoes currently being worn by elite athletes,” said a spokesman. “However this is not linked to just one manufacturer. There is development in shoe tech across the board.

“Because of this speculation and the increased interest in the development in this area the IAAF is going to discuss shoe approval processes as defined by the competition rules as part of the agenda at the IAAF technical committee in two weeks’ time in Zaragoza, Spain, to see if we need to change or review approvals.”

There has been growing speculation about Nike footwear over the past year, with the former Nike Oregon Project member Steve Magness and the sports scientist Ross Tucker questioning whether springs were used in the shoes worn by the Ethiopian Kenenisa Bekele at the Dubai marathon last month.

Those rumours have also been fuelled by a prototype for a Nike shoe that was filed at the US patent office on 4 May 2016 which talks about “an article of footwear may include an upper, an outsole and a spring plate”.

A Nike spokesman insists Bekele was wearing a legal shoe, which has also been tested in training by Mo Farah.

“Bekele was testing a prototype racing flat that we’ve been working on for nearly two years,” the spokesman said. “It adheres to IAAF requirements. Athletes including Galen Rupp, Eliud Kipchoge, Amy Hastings and Shalane Flanagan also tested and competed in the shoe.”

Nike has also revealed its ambitious project to break the two-hour mark for the marathon will take place later this spring at the Autodromo Nazionale Monza complex in northern Italy, on a 2.4km course. The course has been selected because the average temperature is expected to be around 12C with very little wind, which is ideal for racing.

Three Nike athletes have been training for the attempt, including the double London marathon winner and Olympic champion Kipchoge. However most experts believe the attempt to go under two hours for the marathon is more about promoting Nike’s new range of shoes than a serious attempt on a record that few believe can be broken under IAAF rules.

A Nike spokesman added: “The course will be IAAF ratified and will meet to all marathon course requirements, including independently measured course distance, start versus finish location and course elevation. However, the actual attempt will not be an officially sanctioned world record. We believe it will show the potential to break it and enable future official times to fall.”

1 Ken Early: Handball ‘crisis’ a timely distraction from the grim bigger picture
2 The Offload: Springbok heavyweights heading for Pro14
3 All in the Game: No sympathy from Bruno Fernandes
4 GAA Championships await and we need a button for the buzz of the crowd
5 49 and out for Corofin as their long Galway reign is ended
Real news has value SUBSCRIBE

Miami Heat take down Celtics and move on to NBA Finals 10:09
The Offload: Springbok heavyweights heading for Pro14 10:02
All in the Game: No sympathy from Bruno Fernandes 10:00
Ballymun claim Dublin title as Corofin beaten; Man City thrashed by Leicester 07:35
Ken Early: Handball ‘crisis’ a timely distraction from the grim bigger picture 06:00
Here is your handy guide to sport on television this week