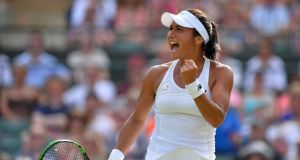 British number one Heather Watson has slammed the abuse she receives on social media. Photograph: Afp

The British No 1 tennis player Heather Watson has hit back at the “cowards” who have sent her death threats on social media.

Following an emphatic straight sets victory over the former world No 5 Daniela Hantuchova, Watson said trolling messages had become such a usual occurrence that she had stopped checking her social media accounts, but that the abuse usually came from gamblers, “because you either win or lose them money”.

The 23-year-old made the comments in her post-match press conference, expanding on comments she made to the New York Times earlier this week, in which she said: “I’ve had death threats. I’ve had people threatening to kill me and kill my family, wishing that I get cancer and die a slow, painful death. Horrible words I couldn’t even think up in my head, to be that mean.”

She said on Wednesday: “I think those people, they’ve got no life. They’re just kind of cowards thinking they can say whatever they want on the internet. They don’t understand that we’re just people at the end of the day.

“I don’t think they’d appreciate people saying that stuff to them. But what can you do? I don’t think you’re going to be able to stop it.”

She told reporters she continues to post on her own accounts, saying: “I think some people get sick of me posting pictures. But I like it so I’m going to keep doing it.”

Her 6-4 6-2 win puts Watson into the third round where she has the daunting task of facing Serena Williams, and means she will take home at least £77,000 from this year’s championships. This is the second time Watson has played in the third round at Wimbledon, having previously reached this stage in 2012.

Watson, who was supported on court by her parents, grandmother and a childhood friend from Guernsey, as well as the sports presenter Colin Murray, beamed as she revealed she had recently bought her first property close to the All England Club, which had been “a big goal of mine for a long, long time”.

She was surprised, she said, by the temperature on court. “It was very warm. But I’m not complaining. It’s nice weather for Wimbledon.”

Asked to describe her emotions at the moment she defeated Hantuchova, she said:“I was very happy. I wanted to smile, but my mouth was so dry, I couldn’t even open my mouth.”

5 Mourinho claims Gareth Bale is ‘better than ever’