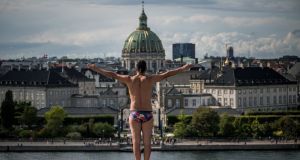 Orlando Duque of Colombia prepares to dive from the 27 metre platform on the roof of the Opera House. Photograph: Inpho

Dublin will host one of the seven stops of the Red Bull Cliff Diving World Series 2019 at Grand Canal Dock on May 11th and 12th.

Hosted three times previously on Inis Mór, this is the first time the World Series event will be held in the Irish capital. Also new to the tour this year is El Nido in the Phillipines’ Palawan region, and one of the oldest cities in the world, Beirut in Lebanon. Mixing it up with World Series fan favourites like Italy, Portugal, Bosnia and Herzegovina and the final showdown at the iconic Guggenheim Museum Bilbao in September.

Since 2009, the Red Bull Cliff Diving World Series has provided a platform for aesthetic free-falls and dives of ever growing complexity - and in 2014 it introduced a Women’s World Series. In its 11th season, the sport’s best athletes will once again leap, twist and somersault from breathtaking heights with no protection, except their concentration, skill and physical control.

Although seven-time champion Gary Hunt from England is the one to watch, it’s all up for grabs this season in the men’s as Olympic divers qualify through the World Ranking and the FINA World Cup meaning competition is at an all-time high.