Crosshaven honours beckon for fleet of over 60 vessels 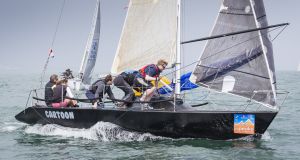 Ken Lawless and Sybil McCormacks’ Cartoon will defend their ICRA national title at this year’s ICRA championships in Crosshaven on the weekend of June 9th. Photograph: David Branigan/Oceansport

As the entry deadline for the annual Irish Cruiser Racing Association (ICRA) National Championships closes on Friday, a fleet of more than 60 boats seem certain at Crosshaven in two weeks time.

All four national champions from 2016 will be defending their titles including John Maybury’s Joker 2, the J109 from the Royal Irish Yacht Club aiming for a third consecutive title.

The Dún Laoghaire boat is the current racing association Boat of the Year following a strong season last year that included winning the Beaufort Cup for the Irish Defence Forces entry during Volvo Cork Week.

Another win on Cork Harbour this year would seal a neat hat-trick for Maybury’s record after championships in Kinsale and Howth in 2015 and 2016 respectively.

This year’s championship will be staged on home waters for Conor Phelan’s Jump Juice, the current Class Zero national champion. David Cullen’s Checkmate VI from Howth will defend his Class 2 title while Ken Lawless and Sybil McCormacks’ Cartoon will defend in Class 3.

However, the actual class bands that the fleet will be split across won’t be known until next week when the full entry list is compiled. Boats are allocated to classes depending on their handicap ratings.

The total fleet size is lower than previous years, even allowing for a standalone event and absent the larger numbers usually generated when held in a Dublin-area venue.

While recent events at Dún Laoghaire and Howth attracted about 120 boats, some 90 vessels sailed previously in 2011 when the nationals were staged in Crosshaven.

The reduced fleet has been attributed directly to congestion in the seasonal fixtures list that has too many events compressed into a narrow window of several weeks in June and early July.

With the biennial Sovereigns Cup regatta at Kinsale scheduled for 10 days after the nationals, both organisers co-ordinated to offer entries free berthing and assistance with boat movements.

But the proximity of both events inevitably obliges some boat owners and crews to select one or the other due to commitments.

This plus the re-emergence of offshore sailing’s popularity – that has seen demand increase for the biennial Dún Laoghaire to Dingle Race – means this event is acting as another choice for crews as it starts just days after the national championships end; too soon to allow boats to return from Crosshaven to Dún Laoghaire and prepare for a 220-mile race.

The National YC has secured Volvo as title sponsor and the Royal Ocean Racing Club now regards the race as preparation for the Rolex Fastnet Race that takes place in August.

Already entries have well exceeded the 35-boat goal with 40 confirmed for the start on Wednesday June 14th off Dún Laoghaire’s East Pier. A weekend finish for most boats will still allow time for a relatively short delivery back to Kinsale for the O’Leary Life & Pensions Sovereigns Cup that begins on Wednesday 21st June.

Of note for those planning the 2018 season, the implications for further fixtures clashes remain high with the Volvo Round Ireland Race scheduled for Saturday June 30th.