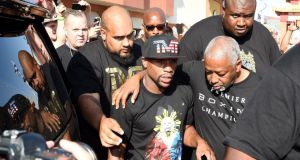 A lingering shadow hangs over Floyd Mayweather. As hundreds of journalists from around the world descend on Las Vegas this week to pour over every detail of his fight against Manny Pacquiao, the best boxer of his generation stands accused of making light of his troubling history of abusing women.

The ESPN sports news programme Outside The Lines has revisited what it described as the “darker side of Mayweather’s personal narrative, obscured by his flamboyant lifestyle”.

The extended report, shown on Saturday, fuelled the turbulence that has swirled around the lead-up to an event billed as The Fight Of The Century and which is expected to generate at least $400m, with Mayweather taking home probably half of that. There was a late scare last week when a row between the promoters over tickets briefly threatened cancellation or postponement of the richest event in the history of the business, and that pressure forced a compromise.

The programme, meanwhile, charged that Mayweather has been afforded an unprecedented free pass over his violent past by a media dazzled by the champion’s celebrity and his considerable influence in his sport, which is pointedly at odds with the punishment handed out last year to the Ravens running back Ray Rice.

A video of Rice knocking out his girlfriend in public went viral on social media and embarrassed the NFL for its slow and reluctant response, forcing it to suspend the player; he still cannot find a team to take him on, despite embarking on “an apology tour”. The Nevada State Athletic commission, on the other hand, has refused to sanction Mayweather by withholding his licence, claiming he has paid his debt to society.

The Chicago columnist Julie Dicaro criticised her media colleagues for going soft on Mayweather, while simultaneously hunting down high-profile athletes in other sports who have been accused of spousal violence. She also took a dig at one of the most prominent commentators in American broadcasting, Katie Couric, who she said served up “softball questions that allowed Mayweather nothing more than a platform to deny his history of violence against women”.

Dicaro was similarly critical of ESPN’s own Stephen A Smith, a Mayweather confidant who likewise did not exactly grill him to death in long interviews at his home in Las Vegas last week.

“I think Floyd, by and large, has gotten a free ride from the media,” the boxing writer and lawyer Thomas Hauser told ESPN’s John Barr – an accusation, it has to be said, that ignores the coverage that has accompanied at least the more notorious of his convictions, arrests and citations for violence against five different women in seven incidents over 14 years.

The most serious of those incidents resulted in Mayweather spending two months of a 90-day sentence in a Nevada prison in the summer of 2012 for domestic violence and battery against Josie Harris, the mother of three of his four children. It was a story that went around the world.

Mayweather, who still maintains his innocence, told ESPN: “If I really did what they say I did, beating a woman, stomping a woman... I’m Floyd Mayweather, they would have brought pictures out instantly. Still no pictures, no nothin’.” But there is the victim’s testimony and the reality of the verdict.

Whatever the fighter’s take on it, the courts saw it differently – as they did on four previous occasions. They had even afforded Mayweather and the boxing industry the luxury of an adjournment to June, allowing him to fight Miguel Cotto in May. That decision alone described the hold Mayweather, the highest paid athlete in the world, has on the finances of his sport and his city.

There is also the most telling evidence of all: that of his son Koraun, who was 4ft 6in tall and 11 years old when he witnessed the assault on his mother in September, 2010. He later told USA Today: “He is a coward.”

After the press conference in Los Angeles to announce the fight Mayweather was asked to respond to the charge that he was being given special treatment when other athletes accused and convicted of domestic violence were suffering “serious repercussions”.

His response defined the double-edged morality of professional sport, where a patina of legitimacy often barely hides the deeper purpose: “When it’s all said and done, only God can judge. But I don’t want people to miss this fight. This is an unbelievable match-up: Mayweather-Pacquiao, May 2nd. Be there.”

ESPN dealt Mayweather one more blow when their combative commentator, Keith Olbermann, urged viewers to boycott the fight, which will be shown, pay-per-view, on HBO and Showtime, as well as on Sky in the UK, at premium rates.

“I will not give Mayweather a dime,” Olbermann said. “He should’ve been banned for life by his sport two, or five, or 10 years ago. I will not promote, watch nor report on Mayweather’s fight. I will boycott it. I urge you to as well.”

The reality is many millions of us will be watching, ringside or on TV. If I need justification for attending, it is on the perhaps thin premise that staying away would set a precedent requiring a boycott of just about every sport event in the world. The question that does not go away is: where do you draw the line? In boxing there often is no line.

1 Ireland to stick with winning formula against England
2 Lewis Ludlam eager to make his presence felt for England
3 Should fans be allowed drink in the stand at sporting events?
4 Brian O’Driscoll accuses England boss Eddie Jones of ‘scaremongering’
5 On healing and wild hurling: The re-education of Diarmuid Lyng
Real news has value SUBSCRIBE