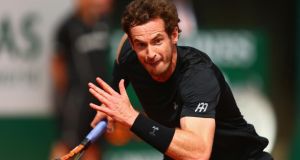 Scotland’s Andy Murray in action during his French Open second-round match against Joao Sousa of Portugal on day five of the French Open at Roland Garros. Photo: Clive Mason/Getty Images

However, until they collide, all is going well enough for them, while Roger Federer, over in the group of serenity, is quietly doing his thing as well.

On day five, there was little to disturb the tennis universe in the men’s draw, but interesting comparisons to be made as the favourites came through contrasting tests using their particular gifts.

Murray will be happy with the result, a little disappointed with a mid-match dip, and encouraged that he could finish so emphatically to beat the eye- blazingly aggressive João Sousa 6-2, 4-6, 6-4, 6-1 in just over two and a half hours in his second consecutive appearance on Court Philippe Chatrier (normally Nadal’s unofficial pied-à-terre).

On the main court a little earlier, Nadal won his 68th match at Roland Garros, against a single, infamous loss, and is giving his critics something to think about after some low-key efforts on clay this summer.

After easing himself into the tournament he owns with a three-set win over the French teenager Quentin Halys on Tuesday, Nadal went through the gears to dismiss fellow Spaniard Nicolas Almagro for the 13th time in 14 matches on Thursday, this time 6-4, 6-3, 6-1.

However, Djokovic is still the tournament favourite. Although the world No 1 had an injury time-out for attention to his lower back and groin on Court Suzanne Lenglen, he eased to a comfortable 6-1, 6-4, 6-4 win over Luxembourg’s Gilles Müller.

Murray next plays Kokkinakis’s more volatile countryman, Nick Kyrgios, who is waiting for him without stress after Kyle Edmund withdrew from their match overnight with a stomach muscle injury.

Murray added: “I realised towards the end of the second set and at the beginning of the third that he had raised his level. I just had to weather the storm, came up with some good serves on break points, and managed to turn it around.”

“She’s helped me a lot. She was an excellent player, played with a lot of variety, something that I tried to do on court. She’s a very nice person, which is important. So far, so good.”

That might have been an involuntary reference to the status of their relationship, as Mauresmo does not know yet how long or if her commitment to the job will last after she gives birth in August.

Caroline Wozniacki, the former world No 1, joined the exodus of women’s seeds at the French Open on Thursday when the Dane was bundled out in the second round by Germany’s Julia Görges.

Wozniacki, seeded five, joined Simona Halep, the Romanian third seed who was last year’s runner-up, and the sixth seed, Eugenie Bouchard of Canada, after a 6-4, 7-6(4) defeat on a blustery Court Philippe Chatrier.