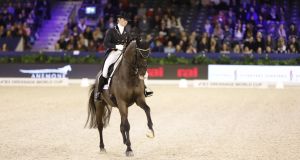 Kildare-born Judy Reynolds, who was on hand to accept her award as The Irish Field dressage rider of the year in The K Club on Monday, maintained her excellent run of form when finishing third in the FEI World Cup Grand Prix at Neumünster in Germany on Saturday morning.

Riding Vancouver K, the 17-year-old Jazz gelding owned by her parents Joe and Kathleen, Reynolds achieved a combined score of 75.109 per cent from the five judges. The world number one, Germany’s Isabel Werth, topped the scores of all five assessors to win on Weihegold (82.565) with her compatriot, Helen Langehanenberg, finishing second on Damsey (76.413)

The result, which marked the first time that an Irish dressage rider has finished on the podium in an FEI World Cup in Europe, comes on the back of a number of recent impressive results for Reynolds with Vancouver K, including at Amsterdam where she set a new Irish record score of 80.290% in the FEI World Cup freestyle to music Grand Prix. The Germany-based rider will have an opportunity to improve on that score in Neumünster on Sunday morning.