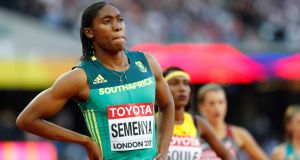 Caster Semenya at the World Athletics Championships in London in 2017. Photograph: Lucy Nicholson/Reuters

The IAAF has emphatically rejected a report that it wants the women’s Olympic 800m champion, Caster Semenya, to be classified as a biological male when her landmark case is heard next week.

Athletics’ governing body told the Guardian it was not classifying any athletes with differences in sexual development (DSDs) as male, “accepted their legal sex without question” and would allow all of them to continue to compete in the female category.

However, it wants the Court of Arbitration for Sport (Cas) to rule that DSD athletes such as Semenya, who was born with testes, must have their testosterone reduced to female levels before they compete internationally in order to ensure fairness with other women.

Explaining its position, the IAAF said: “If a DSD athlete has testes and male levels of testosterone, they get the same increases in bone and muscle size and strength and increases in haemoglobin that a male gets when they go through puberty, which is what gives men such a performance advantage over women.

“Therefore, to preserve fair competition in the female category, it is necessary to require DSD athletes to reduce their testosterone down to female levels before they compete at international level.”

The IAAF’s lawyer, Jonathan Taylor, told the Guardian that he feared the story had been leaked deliberately before the case was heard by Cas next week.

“The IAAF has not said that DSD athletes should be classified as male,” he said. “That is what Caster Semenya’s lawyers say our case is, because they think that will help them before the Court of Arbitration for Sport, but that is not our case.”

Semenya has been unbeatable over the distance ever since Cas decided to change the rules in 2015 to allow inter-sex athletes to compete without taking testosterone-suppressing medication.

However, last year the IAAF produced scientific evidence that suggested testosterone makes a big difference in events ranging from 400m to a mile.

As a result it said it would change its rules to create “a level playing field to ensure all female athletes have an equal chance to excel”.

That scientific evidence has since been called into question, while Semenya’s supporters also believe that asking her to take such medication infringes on her rights.

Some women athletes also feel they are at a massive disadvantage racing against DSDs. The 2016 Olympic 800m final was won by Semenya while the silver and bronze medallists, Francine Niyonsaba of Burundi and Margaret Wambui of Kenya, have also faced questions about their testosterone levels.

Earlier that year Britain’s Lynsey Sharp, who finished sixth in the final said: “Everyone can see that it’s two separate races so there is nothing I can do.”

If Cas rules in favour of the IAAF, Semenya and other DSD athletes will have to reduce and then maintain their testosterone levels to no greater than 5nmol/L for six months prior to competing internationally in events ranging from 400 metres to a mile. – Guardian