England have work to do as Sri Lanka rally 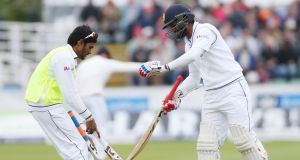 England moved towards victory in the second Test against Sri Lanka whose batsmen showed sufficient resolve on Sunday to push the game into a fourth day if not affect a result that still seems inevitable. Having been dismissed in the morning for 101 in their first inings to trail by 397 runs, Sri Lanka performed much better second time round to reach 309-5 by the close, still 88 runs adrift at Durham.

Captain Angelo Mathews led from the front with a combative 80, sharing a partnership of 82 with Kaushal Silva, who made 60. Dinesh Chandimal remained unbeaten on 54 at the close. For Sri Lanka to even reach this far represents an improvement on the first Test, which they lost inside three days by an innings and 88 runs.

England’s attack took just 17 minutes to take the remaining first-innings wickets in the morning.A different approach was required from Sri Lanka and the batsmen responded. A 26 from Dimuth Karunaratne set the tone as, together with Silva, the openers put on 38 before Chris Woakes pushed a ball across the left-hander who edged a catch to Joe Root.

Kusal Mendis picked up the pace with three boundaries in five balls from Jimmy Anderson to also reach 26 but paid a heavy price when the Lancashire paceman responded with a full-length ball that was skied to keeper Jonny Bairstow.

Lahiru Thirimanne was dismissed for 13 after falling to a beautiful ball from Moeen Ali. That wicket brought Silva and Mathews together and the pair pushed the tourists’ innings towards respectability before Steven Finn found some rhythm to have Silva caught behind. Bairstow accounted for Mathews with his seventh catch of the match. Chandimal kept the scoreboard ticking over to record his 11th half-century, seeing off the new ball with Milinda Siriwadana (35) to leave England with work to do on Monday.