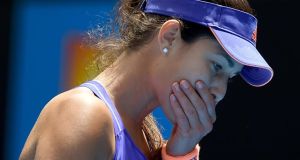 Serbia’s Ana Ivanovic after loosing a point to Czech Republic’s Lucie Hradecka during their first round match for the Australian Open in Melbourne. Photograph: Joe Castro / EPA

When Heather Watson spoke about the crumbling hierarchy of women’s tennis, she was not being needlessly downbeat, just realistic.

As results at the Australian Open have shown already – eight of the 32 seeds falling on the first day – there is hardly a “given” anywhere in the draw. Another 16 seeds are in the firing line on Tuesday.

There were echoes of the US Open last September, when the one-time prodigy Mirjana Lucic-Baroni returned at 32 as a qualifier to beat the rising star and number two seed Simona Halep in the first week, and Sara Errani scored her first win over the seven-time slam winner Venus Williams.

As Watson might have pointed out, expect the unexpected and you won’t be disappointed.

What does this mean for calculations about a winner of the Australian Open? Plenty, because it confirms the trend. And very little, because each match, each round is different. Serena Williams and Maria Sharapova are still the most likely left in the field to meet in the final – although Halep’s credentials are undeniable, Petra Kvitova has an increasing number of friends in the commentariat – and only now is Sharapova looking as if she can put a dent in her appalling record against Serena Williams.

After getting past the Croatian Petra Martic in two relatively easy sets late on Monday to stop the assault on the seeds, Sharapova spoke about the art and agony of getting through the supposedly easier early rounds.

“Realistically it’s important to focus on what’s ahead you,” she said. “You can’t look further than your next opponent. I think we all take that extremely seriously. You never know what you’re going to get. You get really inspired opponents that are not seeded in the first round that are either coming from qualifying, and everyone’s eager to do well in this type of environment.

“You can’t ever underestimate their potential and how they can play. They’re going to fight till the very last point. There were quite a few upsets (on Monday). I was very well aware of that. I watched some of it on TV. I had a long day before my match. I certainly didn’t want to be one of them.”

The defeat of number five seed Ana Ivanovic by Lucie Hradecka sent a spark of electricity through the draw.

“The whole match, I didn’t really feel like myself out there,” Ivanovic said. “It was really tough for me to find rhythm. I had some issues (among them, 10 double faults). It’s really disappointing, probably the worst thing that could happen. But, still, the year is young.”

Belinda Bencic, Carla Suárez Navarro, Anastasia Pavlyuchenkova, Sabine Lisicki, Svetlana Kuznetsova, Lucie Safarova and Angelique Kerber were the other seeds to fall. None seemed comfortable in front of the press afterwards, particularly Ivanovic, who has always suffered from nerves.

“I think they will always play a part. I think it does with all the players – it’s just that some people deal with it differently and play with it differently. I’m sure if I got through this round, probably it improves,” she said. “I’m such a perfectionist and sometimes I judge myself too much. But it was just very tough.”

Her conqueror resided at the other end of the emotional scale. “I’m so happy,” said Hradecka, who has never won a WTA singles title but has had success in doubles. “I still don’t believe that it happened.”