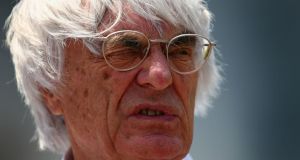 ‘Human rights are that the people that live in a country abide by the laws of that country’: Bernie Ecclestone. Photograph: Clive Mason/Getty Images

The Crown Prince of Bahrain has brushed aside Bernie Ecclestone’s seemingly disparaging remark in which he has accused the country’s government of being “really stupid” to stage the grand prix.

Ecclestone has this week been extremely positive towards a race that continues to attract negative press given the continual protests, and was again due to meet with opposition leaders for talks today. The 82-year-old, however, would appear to have allowed his renowned sarcasm get the better of him as he again faced questions regarding the troubled grand prix.

Asked whether he feared the race had been politicised or was being used for propaganda, Ecclestone replied: “100 per cent”. Prompted as to by whom, the 82-year-old F1 supremo foolishly added: “We believe the government were, in a way, really stupid to put this race on because it’s a platform for people to use for protesting.”

Ecclestone otherwise expressed his customary satisfaction with how the event has been carried off. “It (the race) is good,” he told the BBC. “I don’t think it’s for us to decide the politics, good or bad. It’s a good circuit, a good race, and we think everybody’s happy so we’re here.”

Ecclestone added: "We're not here, or we don't go anywhere, to judge how a country is run. Human rights are that the people that live in a country abide by the laws of that country. I might be in Africa doing 200km/h with no problem. If I come to England and do the same thing, I'm in trouble.

"So it's a case of whatever the laws are in a country. People need to respect them, all of us [visiting], and the people that live here."

Asked whether places like China and Bahrain were perfect locations for F1 races, Ecclestone was again positive as he said: “Yes, sure, sure. As far as we’re concerned, there are no problems.”

When the Crown Prince of Bahrain was asked for his opinion, he saw through the facade. “It’s Bernie being Bernie,” said Prince Salman bin Hamad Isa Al Khalifa on a visit to the Bahrain International Circuit he created. “I love Bernie and his quotes. I think it’s funny. I have a sense of humour.

“People will know he’s being sarcastic. I can’t be thankful enough for his support.”

The backdrop, as has been the case these past two years after the race was withdrawn from the calendar in 2011 following the deaths of many who took part in the anti-government demonstrations, has in places been unpleasant. Last night there were a number of violent clashes between police and protesters in the outlying villages away from the circuit which is ringfenced by an overwhelming security presence.

Eight miles north of the circuit, on the main highway that links the track and capital Manama, the more radical February 14th Youth Revolution created another roadblock with more burning tyres. They also torched a series of chequered flags lining the road and which were being used to help promote the event.

Denouncing such acts, Prince Salman said: “We want to celebrate our connection to the international community, and it (the race) is a force for good. We’re not ashamed of people with differing views. What we object to is people who use violence to further their own political goals.

“I disagree with suggestions we use the race to gloss over human rights abuses. We’ve never used this race to say that everything’s fine. We recognise there are issues in the country, but they are to be solved through a political process, which is well underway. I can name at least four other grand prix venues that have political problems, but it doesn’t seem to attract the kind of attention we have here.”

The problem for Bahrain and its race in the future is that whilst a protest element exists that is willing to cause disruption then the issues faced these past two seasons will be repeated in years to come.

“The issue is, during this political process, we have an element which is more extreme which tries to use violence to further its aims,” added the Crown Prince. “But they’re a very small minority. The vast majority of Bahrainis are peaceful people. If I got lost in Herne Hill in London I think I’d have to watch my back too. You know, we just take these things as they come.

"It’s a law and order issue married to a civil rights issue, as I’ve said before, and balancing the two is key."