Ecclestone may launch next year’s F1 season in Bahrain 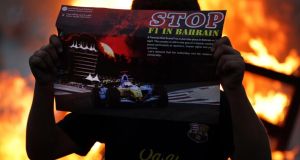 Bernie Ecclestone is considering launching next year’s Formula One season in Bahrain. As tension built here yesterday, with an estimated 10,000 pro-democracy demonstrators gathering at Budaiya Highway in the afternoon and more serious trouble expected overnight, Ecclestone’s stance could be seen as provocative.

Hosting nations pay a special premium for the extra status of holding the opening race and if the move does go ahead teams are likely to spend a further week testing in the Gulf state.

The Bahrain International Circuit’s chairman, Zayed R Alzayani, revealed yesterday that he wanted his track to start the 2014 schedule when he said: “It gives us the chance to have the teams here longer, there is more anticipation and more unknowns.”

When F1’s chief executive and commercial rights holder Ecclestone was asked about it he said: “I hear they are quite keen. We need to have a good look at it. We could do, I suppose.”

The opening race was held here in 2006 because Melbourne did not want the event to clash with their hosting of the Commonwealth Games. It also staged the first race in 2010, when they paid $40 million (£26 million) for the honour, a big increase from their previous fee of $25 million. The following year’s race was postponed following the deaths of a number of anti-government demonstrators.

Distinctly nervous
If the change is made there are likely to be misgivings in the paddock. F1 personnel were distinctly nervous here last year and although they were more relaxed when they arrived at the track on Wednesday there was a subdued mood in the garages yesterday as the awareness grew that more trouble was on the way. There were burning tyres – and they weren’t the highly degradable Pirellis on the Formula One cars.

Elsewhere, a five-strong British TV crew, who had been arrested and detained before being released on Thursday, were thrown out, despite having visas and accreditation. The team had been reporting on the protests that have been going on against the government as the country prepares for tomorrow’s race.

It was reported that they were told they had to leave or face prison. A German photographer was also arrested and images removed from his camera at the infamous Pearl Roundabout, scene of the bloodiest clashes in 2011.

According to diplomatic sources, there are high hopes of further reforms being pushed through in the future to partly appease the demonstrators. But in the short term there is expected to be more violence in surrounding areas than there was last year. There is also the emergence of a new, more radical youth movement among the Shi’ite majority in this Sunni-ruled land.

Back at the track, team principals asked to defend F1’s decision to return to this divided country did their best to insist that sport and politics can be kept apart. Ferrari’s Stefano Domenicali said: “I don’t think it would be good for Formula One to be involved in the political situation of the country because then there is the risk of being pulled from one side to the other, which is not really what we should do.”

His counterpart at McLaren, Martin Whitmarsh, said: I think we’re only all qualified to talk about it from a sporting perspective and since Bahrain introduced Formula One to this region, it’s been a great event and a hospitable grand prix to attend.”

Lotus’s Eric Boullier added: “It’s true that we don’t want to be dragged into a political situation. If the promoter, the FIA and the commercial rights holder agree with the decision to race here, we race here.”

Others on the grid, though, privately are looking forward to getting the first flight out.
Guardian Service