Dublin Marathon: Why are we running out of Irish winners?

Jerry Kiernan: ‘Gym culture’ and strength and conditioning of little use to runners 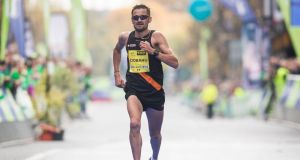 A competitor in the Dublin Marathon last year. Jerry Kiernan’s time of 2:13:45, set in 1982, remains the fastest run by an Irish man in Dublin. Photograph: Ryan Byrne/Inpho

In the now 35 years since Jerry Kiernan won the Dublin marathon one thing has remained constant: the distance. Whether it’s 26.2 miles, 42.1km or 138,336 feet there are no shortcuts, and that applies to every one of the 20,000 runners lining up on Fitzwilliam Square on Sunday morning.

What has changed since Kiernan’s time is what happens at the very front end of the race. Because with the exception of one recently skewed result, the Irish runners are no longer making a winning impact.

It wasn’t always like that; 11 of the first 14 Dublin marathons were won by Irish men. Only one Irish man has won in the last 23 years. The arrival of the Kenyan and Ethiopian entries has largely altered that scenario, although not necessarily the winning times.

Kiernan won that third running of the event in 1982 in 2:13:45, still the fastest by an Irish man in Dublin, and a time which would have won him the race outright in three of the last five years.

“Well the course has changed a lot over the years, so I wouldn’t put much emphasis on that time,” says Kiernan, who also won Dublin in 1992, and has a marathon best of 2:12:20. Now read on.

“What I will say is that the Irish marathon runners have definitely slowed down. The days of running 2:13 or 2:14 in Dublin appear to be over, but then they shouldn’t be. I think there are signs of some improvement, and since the Marathon Mission started up (in 2009), we now have a number of men around the 2:16, 2:17 mark. That wasn’t the situation seven or eight years ago. Whether that graph can continue on up I don’t know.

“I’ve never subscribed to the idea we were part of a golden age back in the 1980s. Maybe we did train harder. And maybe as being children of the 50s and 60s, we walked and ran to school, four or five miles a day, cycled everywhere, and I do believe all this kind of stuff helps you in the long run.

“It’s very unscientific though, so I wouldn’t put too much emphasis on that either. But I’m asked this question every year around the Dublin marathon, why there are no Irish winners? And I don’t have all the answers.”

The only Irish men’s winner since 1993 was Sean Hehir, four years ago. He could only beat the best runners on the day, but that year’s race was without an elite international field after the organisers were left short of a title sponsor. (Hehir’s 2:18:19 was the slowest winning time in Dublin in the last 16 years.)

Hehir ran a marathon best of 2:16:18 in London earlier this year, has twice been the top Irish finisher in Dublin, and Kiernan certainly doesn’t accuse him of not training hard enough. Kiernan also coaches Sergiu Ciobanu, the Moldovan native now running for Ireland, and was first Irish finisher in Dublin last year, running 2:17:40.

“I know from coaching Sergio that he’s certainly doing the training, so I wouldn’t be too pessimistic. It has to be acknowledged there has been some improvement. Mick Clohisey had a sound run at the World Championships in London (finishing 22nd in 2:16:21). Now, if we can just improve a little more.”

On further probing, however, Kiernan points towards some potential flaws in the way top Irish marathon runners are training. Too few run in the group or club situations like they did in the 1970s and 1980s, and he also wonders about the “gym culture” made popular by GAA and rugby players.

“I recently came across a training diary of mine, from 1994. I was 41 years of age, and I was running 110, 115 miles a week, hard sessions twice a week. And that was still nowhere near as intense as I was training at 31, so certainly we trained hard back then. Again, is that the complete answer? I don’t know.

“We have more people running now than ever, but not as many training with clubs. I remember going down to Clonliffe Harriers on Tuesday nights, we’d run 14 or 15 miles, and the last four miles were raw, uncompromising stuff, toughened you up. The same went on in Donore, Liffey Valley, Raheny.

“I also remember training with your old fella around Belfield. He was towards the end of his career, I was still starting out in mine, we did a fartlek session, and he did not take any prisoners. I recall it vividly, because I could barely keep up, he ran the shit out of me, and that’s what people did. You’d go running with those boys, the likes of Neil Cusack, you just fastened your seatbelt and held on.

“And I know it sounds very old fashioned to say this, but I have very little time for strength and conditioning. I recall Rob De Castella, the great marathon runner from Australia, decided to add some gym sessions, some stretching, and he actually got worse. He went back to just running.

“As runners, I would say the gym should constitute no more than one per cent of your time. Nowadays, you hear the Gaelic boys in particular go on about strength and conditioning, and I don’t consider that a training session at all. They say they train six times a week, including four times in the gym, when to me that’s only training two times a week. I never went near a gym, and never felt I was missing out either.”

Kiernan doesn’t stop there: he also reckons that for whatever reason more potentially elite athletes are being lost to other sports.

“Of course. We’ve seen a number of Dublin footballers in recent years who were originally involved in athletics, or swimming, and were reasonably good at it. But they either didn’t have the mindset to train, or simply weren’t good enough, and in my mind took the softer option.

“And look, there’s only one county football team in Ireland who perhaps train at the level that athletes do, and that’s Dublin. The rest are percentages of that, and some counties are just plain embarrassing when you see them out and about.

“That’s why Dublin largely win everything, and do look reasonably fit for a team sport. But the majority of others don’t. Now it’s clear they do spend a large amount of time in the gym, because they’re all big, but can hardly move. Now it’s rarely I watch it anyhow, but anytime I do watch Gaelic games, I’m struck by how slow everybody is. They’re big fellas, just hammering into each other. Gym culture has taken over, no doubt about that.

“If Gaelic games was an international sport, there would need to be a massive, dramatic reappraisal about the way boys go about their gym and fitness. And the rugby boys are more or less the same. They’re very fortunate that only a handful of countries, principalities mostly, play rugby. It’s about as international as road bowls.”

Anytime I do watch Gaelic games, I’m struck by how slow everybody is. They’re big fellas, just hammering into each other

Kiernan isn’t alone in his thoughts on the issue. Earlier this year, Dave Hooper, son of 1980 Olympic marathon runner Pat Hooper, produced a radio documentary, the History of Irish Marathon Running, and it too highlighted the fact that for all the advances in coaching, sports science, nutrition, recovery, etc Irish marathon times have not improved on the 1980s.

Pat Hooper talked about doing a 21-mile training run on a Friday, 24 miles on the Saturday, and 27 miles on the Sunday: “Not many runners could hack that,” he said. “And still can’t. And that’s one of the reasons why the standard has dropped. They’re not prepared to do the hard training.”

Treacy also talked about doing a 29-mile run in the build-up to the Los Angeles Olympics in 1984, where he won the silver medal.

“I know there is a danger where comparing generations,” says Kiernan. “And this is not just an Irish thing. In 1985, for example, 10 times as many British runners ran under 2:15 for the marathon than in 2015.

“We were pushing each other too. If I ran 2:15 or 2:16 30 years ago, I’d think I ran shite, would go for a check-up, thinking something was wrong. I must have a virus or something. Because it was so, so moderate.”